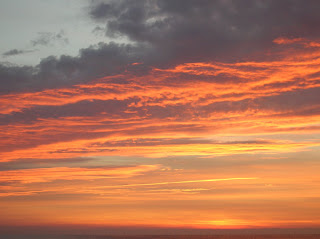 I had been rather worried that the boat was going to have a corkscrew stern. However I put it together—clamping every which way, screws here and there, ratchet strap and cable ties, the transom would twist up at one corner and sneer at me. Local advice ranged from hitting it with a hammer to hanging it from a tree. I was just getting disheartened when the designer stepped in with some timely encouragement that got me in the workshop forcing the upper chines into position. Amid the creaking and the groaning, I secured them with cable ties, then stood back and lo, the boat was straight. What a relief. My chief eyeballer deemed it still out a tad but I was satisfied and, keen to ride the wave, went on to fit the sole. But first I had to turn the boat.

Now this garden is communal and although most of the houses are holiday homes more often than not there’s some bod about, some purveyor of dodgy advice, lurking round my bench. Today, just when Vitalstatistix or Unhygenix would have come in handy the place was deserted. Like policemen they disappear on the rare occasion that you actually need them. So I did it myself and it wasn’t that difficult.

I clamped trestles to bulkheads 1 and 3, took a deep breath and, uttering the war cry ‘Allez op!’ heaved the boat onto its beam, then scuttled round to the other side and pulled it over on top of me, tortoise style. Then it was just a question of setting it down gently. I wouldn’t recommend this method for back sufferers but for me it sufficed.

The sole had only been roughly cut which was fortunate as its lines didn’t coincide with the bottom shape. Later I wondered that the stern of the sole might have been on the bows of the boat. But in no mood for more worrying I simply marked out the sole from underneath using the hull as a stencil, cut and gave it a bevel with the circular saw and fixed it to the bilge chines with packing tape. The tape, as well as keeping the sole in place, will hold in the resin when I epoxy the interior seams.

And that’s it, we have our shape. Now I’ve got to take measurements for frame 7, make and fit it. And then the gluing begins. 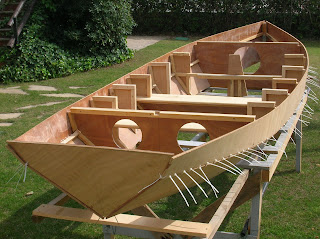 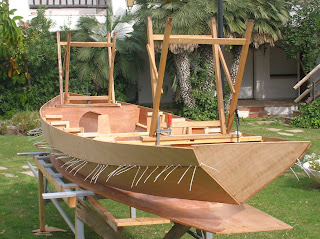 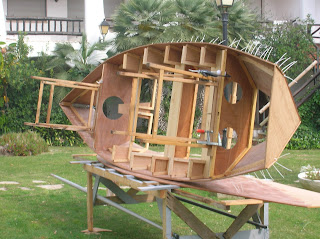 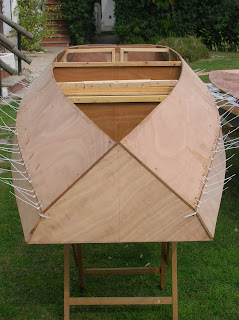 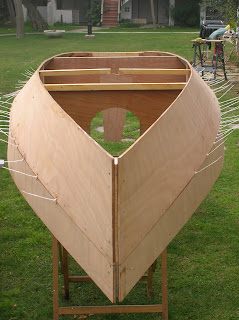 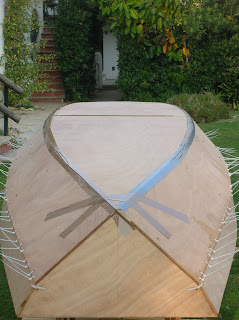 Looks brilliant Ben.
I sometimes get confused with some of the technical terms you use for different parts of the boat, but on the whole it makes sense.
What are the cable ties for? Do you strap it together while the glue dries? Do you take them out afterwards and then fill the holes?
Progress with auto renart appears to have come to a halt. They've had the van for 2 weeks now, and still no news. I tried to phone yesterday but Joan wasn't there. So... all going as well as can be expected...

My van was at the mechanic's for 2 months lat year just getting a service before it's MOT. 2 weeks is nothing. Actually I was glad to have it undercover.
You've guessed right about the cable ties. They're the stitch part of the stitch and glue technique. First I'll glue (fiberglass)the interior seams, then cut off the ties and glue the exterior.
Sorry about the techospeak--there's a fine line between being impossibly long winded and the amount of jargon that I can expect people that aren't building boats to understand.
The bulkheads 1 and 3 that I mention in this post (the ones with the holes in them) are sometimes refered to as frames 2 and 8 so it is confusing--even for me.

I'm glad you're enjoying it Graeme. Now that I'm over the hump the fun's really going to begin.

Gavin says we should encourage you, so here goes: "Go for it Ben!" There, does that make you feel encouraged. Good.
I'm building a 1/6th scale model of Light Trow. Something to do with the economics involved in purchasing materials and the available space prevents me from attempting the full size jobby. I've built dinghies before and I have to say that trying to build a model of one is a b****y sight harder than the real thing! Your Trow is looking really sweet - a credit to Gavin's plans. I'm intrigued that you have built the topsides before the sole. This is probably why I have had difficulty with my model, because the transom was truly difficult.
I shall read with interest your further posts.
By the way, I'm Richard from Somerset.

Thanks for that Richard. I originally planned to build the bilge chine, then sole, then upper chine, but when the bilge chine didn't give me the exact shape (it was twisted) I added the upper chine to help the boat find it's shape. The sole simply fitted to the shape rather than actually giving form.
Anyway, good luck with your model, I'd be interested to see a photo when it's done.

After reading the entire blog up til today (August 14, 2009) in the last 4 days, I think I may be building a Light Trow of my own. Would you mind if I asked you some "technical" questions about some of the things you did during construction? (I've never built a boat before either.) Oh, and way to go on the blog! Your writing is very entertaining, and the photos are great! Luckily I just got an iPhone so I could read it in bed. :)