The beauties of bycatch 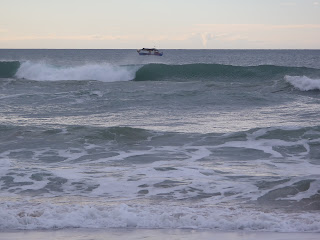 Bycatch is one of the dirty words of sustainable fisheries. I'm fortunate not to have to witness much wastage in my small experience of commercial fishing. The fifteen souls and six boats that work from the nearby port bring in small catches and the unsaleable fish are taken by the fishermen, given to friends or sold. I earn a bag of fish big enough to last me a week for as much work as I feel like doing on Monday mornings. Being fascinated by fish in the sea and on the table as well as the world of fishermen, added to fact that I'll always drop everything to go on a boat of any sort, makes Monday mornings a holiday for me. 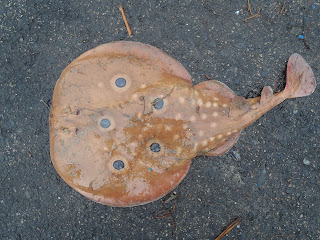 The common torpedo (torpedo torpedo) is not a commercial species. It lives in shallow coastal waters over soft substrates and preys by night on small bony fish and crustaceans. It's downfall in terms of it becoming part of bycatch is its method of attack and defence.


The torpedo can deliver hefty electric shocks, up to 200 volts according to fishbase.org and the wikipedia. The shocks diminish in intensity as the animal dies and cease as it does. It is not practical to attempt to extract the torpedo from the net while it is evidently alive, and even when it appears dead it can often spark up again. And so it can never be returned to the water alive, unless it drops from the net as it comes over the roller and can be teased out through a scupper with the toe of a welly, or grabbed by the tail and flung. It appears to be the torpedo's back that shocks or the distinctive blue spots themselves, I've never touched one in such a way as to be shocked intentionally. Please excuse this lack of scientific fibre, I'm no Stephen Maturin.

Though they are widely thought to be uneatable, fishermen have always cooked them and I've found they make fine food. The difficulty, if there is one, is in preparing them for the pan as you have to peel off the tough skin—a task best performed on the dock, or outside at least. Many fishy jobs can cause havoc in the kitchen. 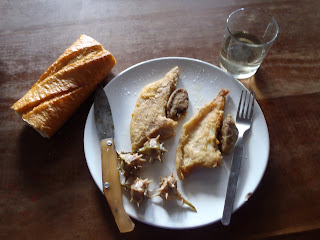 Torpedo 'wings' with torpedo livers and sea snails.
Posted by Ben at 12:06 5 comments:

All for a bag-full of bycatch 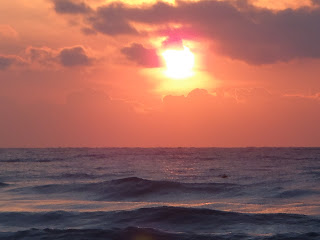 In the chill dark, an hour before dawn on Monday morning, I creep out of the house and go fishing.


I meet the fishermen on the dock and, with sleepy greetings, we step down onto the damp deck. Skipper MacGyver and David pull their ragged yellow oilskins from the tiny wheelhouse. I've come dressed in the same blue yachty wear that I use on OB, only that now, after a winter of fishing, the clothes are black-stained with cuttlefish ink, ringed with complex tide lines of salt and fish slime. They also harbour a permanent damp and stink. What were once reasonable quality foul weather clothes are now simply foul clothes.

The boat grumbles to life, shivering under foot, Flash fm blares a loud techno beat, MacGyver and David light up. We push off from the dock and chug out of the small port to meet the sea and the dawn with a pleasurable sense of expectation—maybe today the net will have some prime fish and no tiresome weed.

'Garbi o llevant?' MacGyver asks me. He wants me to take a shot at divining the direction of the current, garbi-west, llevant-east. After strong westerly winds on Sunday and a swell from the southwest today I say 'garbi' with confidence. MacGyver grunts and says 'llevant', David declares himself neutral. A deep red ellipse of sun appears briefly between the horizon and a thick bank of cloud. In the dull light we slow as we pass close to a fishing buoy all three peering into the depths to see how it lies. 'Llevant!' exclaims David, 'That's why MacGyver's the skipper.' I say, 'And I'm just the crazy volunteer deckhand.'

The net is set parallel to the coast which runs east west, and so we rumble on to our first buoy to haul the net in the same direction as the current. David grabs the buoy and hoicks it over the bulwark before passing the line round the roller drums on the bow. I pull the lever that sets the hydraulic machinery in motion and David and I look down at the buoy's anchor twirling up from below. We stop the rollers, tidy the line and secure the anchor then, rollers on, we wait for a first sight of the net. Being loaded with weed it brings a torrent of swearing from MacGyver and David. The quantity of brown twiggy clumps that come aboard with the first twenty metres portend a vast amount of work back at the dock untangling the weed from the mesh.

We are hoping for sole and cuttlefish—top sellers at the moment, though you don't want too much or the price falls. David goes back to the wheelhouse and holds the boat bow to the net while MacGyver hauls from amidships and I stand near the bow taking the swell with flexing knees, pulling trailing weed from the net and shouting back the names of fish as they come over the roller, only to be corrected by MacGyver. There aren't many of them, the weed in the net alerts the fish to its presence and they swim over it. Grey mullet, pandora, steenbras, bream, an octopus eating a grey mullet, a cuttlefish spurting a jet of ink in a wide arc as it comes over the roller and weed, tons of the stuff.

The net is long, too long to mention and though the fish are few and far between the eventual catch, though considered poor, is not entirely ruinous. As soon as the net is aboard MacGyver turns the boat for home and David and I set to the task of extracting fish, flinging them into buckets. With the swell hitting side on and the occasional whiff of exhaust, along with the pong of my clothes a slight dizziness comes. I lift my head and look forward, getting a light dousing of spray and thin rain. The tiredness behind my eyes mixed with the light headedness and the yawning hunger makes me feel like I'm returning from a party or maybe I'm just waking from a dream. 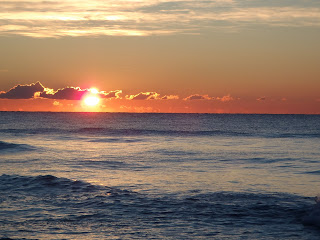 In the days when the population around the Mediterranean was too small to make an impact and there was no rampant Japanese market the Mediterranean Sea had vigorously healthy tuna stocks. The fish would enter the Straits of Gibraltar in late spring and fill larders from Andalucia to Sicily and beyond. On the coast of Catalonia tuna fishing was an activity in which whole communities would participate. Villages were often built slightly inland on raised ground but when the tuna came the population would decamp to the beach and set up shop for the duration.

The method of fishing was called 'Almadrava'* and the technique was as follows. At a chosen beach a net would be set diagonally with respect to the land, with one end fixed to the sand and the other rowed out to sea and anchored. The fast swimming fish, entering the net, would find themselves forced ever nearer the beach until they reached the inevitable cul-de-sac. Here the villagers would wade in with harpoons while others in boats would attack the fish from behind. The word 'Almadrava' comes from Arabic and means 'place of battle'. Almadrava fishing was nothing short of a massacre. The moment of thrashing silver fish, wild water, sunlight, bronzed limbs and gushing blood is vividly depicted in Salvador Dalí's 'la pesca del atún' (Tuna fishing) painted on the Costa Brava over the summers of 1966 and '67 and capturing on canvas one of the last seasons of almadrava fishing. 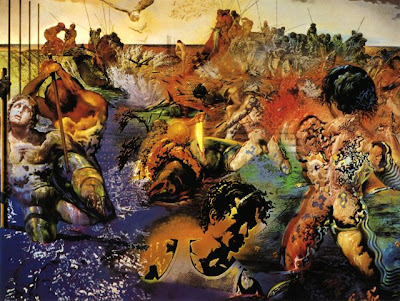 Almost all of this abundant harvest of tuna would be conserved in olive oil. Originally in glass jars and later in tins. The fish tripe, salted and dried, would sustain the population over the winter. Nowadays, while you can buy tuna flesh in tins very cheaply and indeed, it's not enormously expensive even fresh, the dried tripe, tasty though it is, commands a price far beyond its worth. But such is the madness of the world we have made for ourselves.

*In Southern Spain tuna is still fished with a method called 'almadraba' (note the b rather than v that distinguishes the Catalan). The Andulucian almadraba is set at sea, as opposed to from the beach, the nets forming a maze that leads the fish to a central area. Boats converge and a net floor is raised bringing the tuna to the surface where they are killed and hauled aboard. Again it is a place of battle.
Posted by Ben at 11:32 No comments:

A load of bull 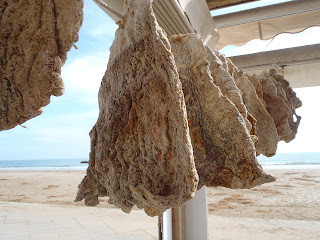 Local Catalan fisherman's food at its most traditional is tuna tripe. Salted and sun-dried in the style of salt cod it can been seen swinging in the breeze outside restaurants, as much to continue the drying as to advertise that fish tripe is on the menu. Like other foodstuffs once eaten only by fishermen tuna tripe, known as 'bull' in Catalan has become fashionable—at least in Catalonia—and now costs around 60 euros per kilo, if you can find it at the market.

The town of Torrdembarra considers itself the capital of 'bull' cusine and once a year holds a tasting day in which a pair of chefs cook various tapas which, for three euros per tapa (wine included), can be tried by the hungry public. For quite a few years I've queued up for my yearly dose of 'bull'. 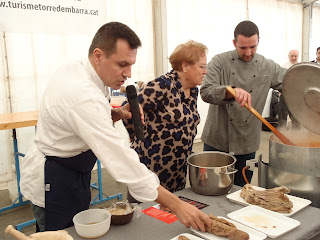 This year the cooks involved were Oriol Castro of the Bulli foundation, Alex Segù from nearby restaurant Mulsum and, star of the show Iris Figuerola, fisherman's wife and renowned expert on all things 'bull' who demonstrated her 'bull al romesco', a stew made on a thick paste of almonds, dried peppers, garlic and fried bread, stock, tripe and potatoes. 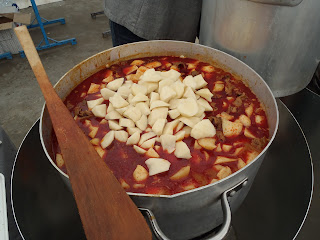 In go the spuds

Stomach or offal of any sort and of any animal tends to be an aquired taste and hard to err, stomach by the unconverted and 'bull' is no different. One woman I spoke to, who hasn't eaten it since she first tried it many years ago, said it tasted of urine. My opinion is a bit more generous. 'Bull' tastes vaguely of tuna with a more general and pervading fishy flavour underneath. What makes it more unusual, apart from its provenance, is its pleasantly spongy texture. But for me what heightens the pleasure of eating this offbeat foodstuff is its history. Knowing that this was the hard tack that sustained men on the sea makes all the difference.

A foodstuff that hasn't yet become fashionable and which is usually discarded or kept back for personal consumption by the fishmonger is monkfish liver. As there is no demand for monkfish liver I can pick up this tasty and nourishing food for free, which means I can afford a few 'gambas' to go with it. 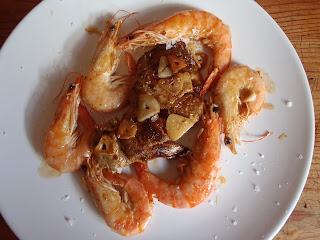