Festival of the Sea

Onawind Blue wasn't quite ready for the traditional sail festival at Cambrils. This was a pity as there was to be a section devoted to home-built boats (there are now five amateur-built, ply and epoxy craft on this coast) but it was also a blessing as a force 6 blew hard and I would almost certainly have found myself in difficulties.

I arrived at nine, in time for the 'sardinada' the traditional maritime breakfast of barbecued sardines piled on toast rubbed with garlic and tomato, the whole drenched in fruity olive oil and washed down with copious amounts of red wine. Nothing sets you up for the day quite like it.

Having met many old friends during this repast and feeling much feted we meandered to various bars to drink all the coffee. The wind was playing havoc with awnings and clawing at the water but our conversation and laughter rang out across the harbour. 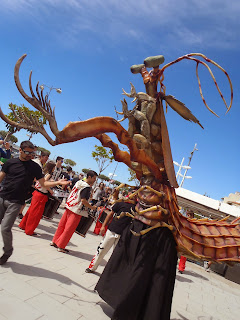 A procession formed, led by a giant prawn and followed by a band of pipers and drummers. Aha, thought I, now will we dance the Lobster Quadrille from Alice in Wonderland, it couldn't have been more fitting.

And so we followed the great crustacean, not down to the shingle but to the ancient watchtower built by fishermen to spot boats in trouble in these vicious winds. Many words were spoken and many more lost to the wind, a song was sung by a man with a chillingly clear voice and a quiet fell over the crowd as we revered those that had once sailed from these shores.

The programmed 'raising of sails' was ditched but we made our way down to the boats to prepare them for a post prandial sail, weather permitting. I spent the time with my friend Bosco who initiated the Ella skiff build having built a Weekender and, even more miraculously, navigated the Catalan bureaucracy and made the boat entirely legal. A feat by any standards. He has now designed and built the Nauus 480 http://www.nauus.cat. A well convieved boat with a Welsfordesque stem, water ballast, a gunter rig and a six horse outboard in a tidy well and an overall appearance of seafriendliness and safety. Designing a boat for home construction is very new to this coast, almost unheard of in fact. But Bosco is dragging Catalonia into the 21st century with his new yard and bright ideas. The 480 can be bought at various stages of completion though the official design and construction team have to oversee the finished work. There are plans to take the design a step further and build a larger, cabined version. But I was in the way as Bosco and his colleague, Tony, hurried to prepare the boat for its inaugural launch. I wandered off with good intentions only to be roped into sampling a few jars of craft beer.

Lunch: a massive fideua (short, slim lengths of pasta cooked in a rich fish stock until the broth is fully absorbed) served by a monoglot speaker of the language 'No'. Fork'? 'No', salt? 'No', allioli? 'No', etc. There was plenty of beer however, cooling on ice. We sequestered a two-wheeled fish cart as a table and sat on crates to gorge. Then it was back to the bars to finish any coffee supplies, and, at last, to the boats.

I embarked on the lateen rigged Farigola (thyme). A genuine 6, or so, metre gem, neglected in the traditional way. 'She's a bit dry.' said the owner as I admired the view through her seams, 'I think the pump still works though.' She began behaving in the manner of a boat intent on having a quiet siesta on the sea bed, water seeping up through the bottom boards and the ship's bucket floating merrily from port to starboard and back. Then the bilge pump suddenly burped enthusiastically to life, belching brown water over the side.

We set the sail. The lateen rig halyard has a 4:1 reduction, so while one crew pulled, the other (me) struggled with miles of unsupple, salt-dry cordage, I felt like Laocoön dealing with sea serpents. This unwieldy mass satisfactorily stowed on deck I was immediately called aft to clap on to what, in a gaff rig would be the throat halyard. Being too windy outside we were to sail within the harbour, necessarily tacking every 200 metres. There are two lines that run to the forward most part of the rig, they have to be loosened so that the front end of the yard can be passed over the prow as the bow crosses the eye of the wind. Then they have to be hauled taught again. Tacking so often the work was constant and I had no chance to adjust the waistband of my jeans. But luckily the gusts came down so hard, (at one point everybody having to throw their weight to windward) that we struck the sail, before I mooned to the onlookers on the dock or had to give excuses for my lack of stamina. We continued, in a more tranquil fashion, under power.

I was handed the helm as the skipper wished to take photos. He stood on the bow while I sat in the stern and watched the water slosh around my toes. This was very pleasurable as just before leaving the house that morning I'd removed my socks thinking that I would be taken for a land animal if I turned up in such lubberly attire. Socks, forsooth! As a consequence I had rows of blisters across my toes, but this soreness was soothed by the rhythmic rising and falling of cool salty water.

We puttered sedately about the port at 2 knots occasionally pulling up to the quay to take on excitable teenagers who were given their first taste of a traditional sailing vessel. 'It's entirely normal.' I replied to anxious glances at the bilge water, jamming the waterborne bucket under the bench and nonchalantly lifting a foot to examine a pruny toe.

All great days on the water come to an end and with the sky paling to peach I said my goodbyes and hobbled over the gravel carrying my shoes, quite the jolly tar.
Posted by Ben at 09:53 1 comment:

Boats and the sea, recently 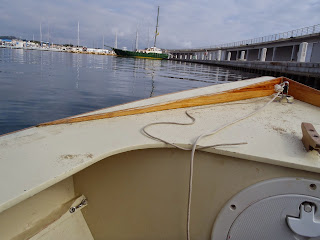 After Onawind Blue's little solo adventure, off on the undertow and down the beach, I've slowly been scraping away at her paintwork. It's more than two years since she had any maintenance and her decks have bubbled and flaked. Structurally she's sound although she spent too long on a trailer supported by a pair of rollers, the pressure points have left cracks on her sole but the wood is unbroken.

It has been a long time since I went out on sea with my friend Macgiver the fisherman. But when I finally got down the harbour for a visit the news on everybody's lips was that the boat had sunk. Fortunately the boat was docked at the time, although it broke its mooring lines and went to the bottom. The refloating and repairs, especially to the engine, have been expensive. Macgiver wonders if he'll have the resources to get back on the water, especially as he's now run up on a tangle of red tape. Official engineers are demanding he complies with new regulations—or some such, quite frankly I haven't understood exactly what they're demanding but the upshot is that time is tramping on and Macgiver's not making any money, although he's chomping through savings. 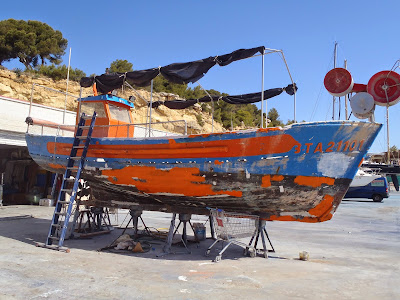 But the sea is in a sad way. It shows in the industry. Nobody's catching much. Two other fishermen have retired after some 40 years at sea and that leaves just three boats in the port. This in a town that 100 years ago would launch 370 boats from the beach. Meanwhile supermarkets proliferate and their fish counters are groaning, daily. The labeling is unclear and although it's easy to spot farmed fish, (because they're all the same size and weight) the provenance of other species is less clear. Feeding myself on the fruits of the sea has never been thornier.

To another boat I returned a marker buoy, that had been washed up on the beach, and was rewarded with a few fish. The fishermen went home, the truck left for Tarragona with the catch. It was just passed noon.The harbour was lifeless. I scaled and cleaned my fish on the dock, throwing the guts into the water. No hungry small fry swam up to take them and no seagull swooped down to swipe them, the offal simply sank to the bottom. 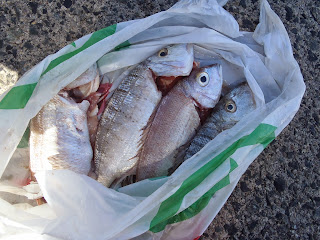 On a brighter note, work on OB is coming along. Not at the pace I could wish exactly, taunted as I am by one perfect sailing day after another. Now, however, there is less to do than before as I've allowed myself a lowering of standards which means I don't have to strip the paint from all those difficult corners. Or indeed the outside of the hull as that will remain untouched this year. It's a facelift. Just the decks, the interior and the spars will get a clean up. I'll stick with a bright gunwale and masts for the moment as I still have a tin of varnish in the cupboard, but I can see this nod to my nautical vanity going overboard fairly soon. And that'll be a good thing. 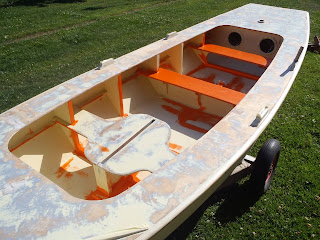