Summer cruise, Part 2. The knife is sharp, the knife cuts. A roughed up rowing boat... 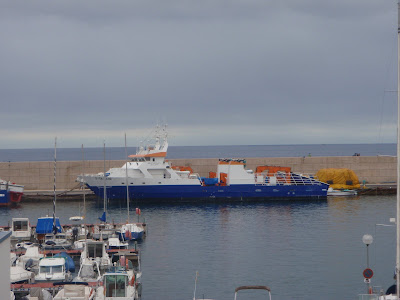 and a modern tuna fishing boat in l'Amettla de Mar
So I spent the afternoon making short tacks down the coast. Nosing into every cove and sailing excitingly close in under the cliffs, I stared into the mesmerisingly clear water judging when to tack by the depth. I didn’t switch the GPS on as this only has the effect of making me check our speed every few minutes. Gadgets turn us into nerds.

By the end of the afternoon I’d reached l’Ampolla and swung east to the low lying arm of the river Ebro delta; El punta del Fangar. Banks of fine grey brown sand shifting about on the winds and currents, low scrub and driftwood, gulls, terns and egrets, acres of solitude.

I ran the boat aground and took a line ashore to a handy concrete stub and then waded astern with the anchor. This would be a fine place to spend the night providing the Mestral wind didn’t blow. The beach was white with gulls and their mess and I strolled a round with a cup of tea wondering if I should get the boat up and out of the water for a safer night. But the beach looked like it was often under water, probably when the North Westerly wind blew and waves washed over it. Finally I made a phone call, a drop in temperature and northerlies were forecast. I could be stuck on a lee shore with a nasty sea washing over it.

On the last of the wind I sailed back to Port l’Estany anchoring just as the sun dropped behind the hills. I was feeling festive after a great day’s sailing and opened some wine and cooked up a little feast.

It was while I was putting up the tent, cutting a cable tie off a pole, that I found myself thinking, ‘This is not a seaman like way to be using the boat knife.’ And the next minute, blood flowed. Only a short cut to the end of that useful middle finger but deep enough to need a long while to stop bleeding, I knew that in one stupid moment I’d ruined the next day’s sailing. I bedded down still sucking my finger determined that if I couldn’t sail tomorrow then at least I’d go and buy some minimal first aid.

The Mestral came on strong in the night and I fought the tent into submission and hoisted the mizzen to stop us slewing all over, my finger opening up with an eager red flow. Shredded cloud streaked across a waning moon and when the morning came it was low, grey and windy. Just as well I’d moved off that beach the evening before. I walked into town to find a pharmacy.

L’Ametlla de Mar is an ugly, impenetrable town. For all its favoured geographical position, its architecture and planning all speak of a hard, subsistence existence by the sea. On this dull Friday morning the town was full of blank faced French tourists peering into the port waters and wondering how they’d ended up somewhere so ugly and impenetrable.

The town’s scant charms lie in its history and anybody with a grain of salty cred will refer to the place not as l’Ametlla de Mar, Almond on Sea, but as ‘La Cala’, which is part of the town’s original name; La Cala de l’Amtella, The Cove of the Almond, or Almond Cove. Over a couple of centuries the town grew up around the protected cove or cala to become an important fishing port and the seat of Catalan nautical wisdom.

I bought some rudimentary first aid, repaired my finger on a bench and then succumbed to the gravitational pull exerted over me by the restaurant ‘El Pescador’ The Fisherman. Full of paella and calamari I walked back to the boat. She looked so lovely sitting there and the wind was so emphatic that I decided to go for a sail. Despite a large, forbidding cloud that lurked just offshore.
Posted by Ben at 10:47 2 comments:

Summer cruise. Part 1, An encounter with the great white Turd 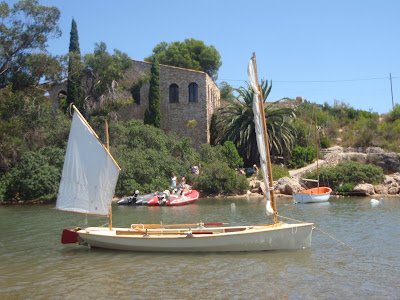 After a few days making lists and packing gear I trailered OB down to l’Ametlla de Mar and launched at Port l’Estany. I had three days of cruising ahead of me, no huge amounts of sea miles to cover, no arrangements or timetables or deadlines, no plans except to enjoy the local coastline and, er, no map or chart. I’d forgotten that piece of kit.

At first I saw this as an unforgivable, lubberly error but then I realised that since I lost my faith in Spanish maps I’ve generally guided myself by intuition. And anyway in Morbihan, under the illusion that charts were to be issued, I’d had no other guide than the map on the place setting where I’d enjoyed oysters on my first night. And hadn’t I sailed round the east coast of Ibiza with a freebie petrol station road map. And didn’t I once navigate the streets of St Helier, Jersey with nothing but a souvenir teatowel.

I was familiar with the shoreline, no map would be no problem and anyway it fitted with my new attitude of more spontaneous, instinctive cruising. But chart or no, adrenalin charged sailing was just around the corner.

OB was sailing herself close hauled and I was gazing up and down the coast wondering whether to loosen sheets and sail north or tack, tighten and go south. A motorboat was coming up from behind on my starboard side, I paid it no heed except to register that soon I’d be eating some wake. But as it came barrelling over the sea it looked less and less like it intended to turn and more and more like it might run me down. ‘Well he must have seen me,’ I thought—I could see the skipper and others on the flybridge—‘He’ll turn.’

‘He’ll turn...he’ll turn...he’ll turn...’ and suddenly I was jumping to unlock the tiller and bearing away. 40ft of white plastic thundered by. I could almost touch it. Torrents of insults spewed from my mouth, I stood up, my right arm and middle finger stabbing through the air but this wasn’t a convenient posture as we were right under the boat’s rooster tail. I threw my weight on the gunwale and stopped her going over but got drenched as water flooded aboard. And still insults flew from my mouth.

Spanish is a great language for swearing, you can do things like shit on the grave of someone’s whoring mother, and although I did this whole heartedly it didn’t quite hit the spot like a deep throated, well rounded Fuck you!

The skipper with his swept back grey locks and blue striped shirt with white collar and cuffs gave as good as he got. He’d obviously got the money to own this sort of boat due to a talent for always having the last word, for as we went out of ear shot he slung the contents of his glass at me.

I stood with my arm stretched above me and finger rigid, bellowing obscenities until I could bellow no more. As the boat became a dot on the northern horizon my anger passed, I tacked, turned south, tighten the sheets and started to bail.
Posted by Ben at 08:10 6 comments: 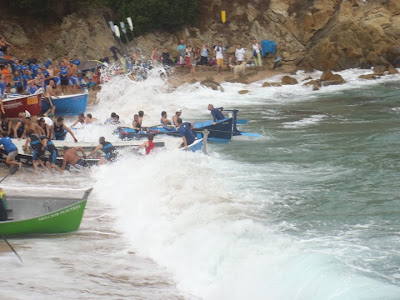 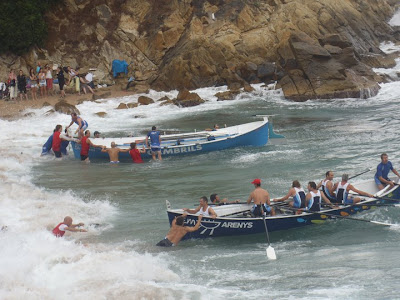 My rowing team had a hard time of it at last weekend’s regattas at Lloret de Mar. The recent north easterlies had brought a large swell which, arriving at a steep beach surged alarmingly. Sometimes the undertow left the boat’s sterns grinding in the sand while their bows were lifted high in the air. 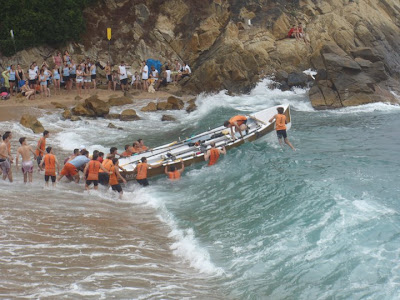 I didn’t go but my team mate Inma, who sent me the photos, said, (roughly translated), ‘It was a hard day, the sea was impressive and every time we had to board and launch it was like doing a penance. We applauded every time a team arrived safely at the beach. We didn’t have a very good day, the sea state did for our lane but all four boats got round and we’re still in the lead overall.’ 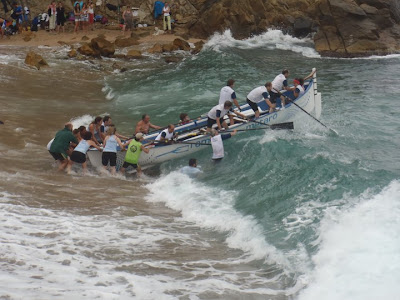 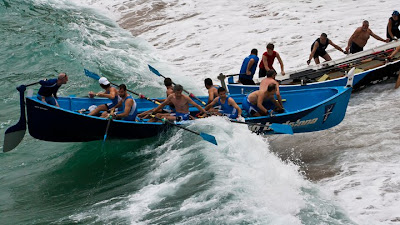 Sail the Western Med aboard a Brigantine

My good friends aboard the tall ship El Cyrano are soon leaving on the first ‘Tall Ship Training Experience.’ And there are still some places available.

Leaving Tarragona on the 16th of July the plan is to sail north to France, weather permitting of course, over 6 days. The Cyrano will spend each night at a port on the Catalan coast. If you want to gain a unique view of the north western Mediterranean in summer, away from the crowds, I’d thoroughly recommend the trip.

Anyone who signs up will form part of a watch and be expected to participate in sailing and running the boat together with the professional crew. You can expect a full and varied sailing experience on board a well-found ship as well as the opportunity to meet new, interesting people and work in a team alongside them.

Personally I hope to be able to join the Cyrano, if not on this first journey then on the next from the 30th of July until the 4th of August. I’ve sailed up the Catalan coast once in OB and I’d love to do it again on a large sailing vessel, not so much for the chance to relax, gazing up at curves of canvas or to rediscover the coastal harbours and coves as for the opportunity to learn about sailing a craft of this size.

The price is 880 euros per person (ex VAT) for six days with all meals included. You won’t need much more than a sleeping bag, some light, simple clothing and some money for beers ashore.