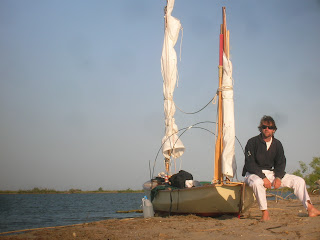 The book based on this blog is now available from Richard Wynne of Lodestar Books. Under the title Catalan Castaway, the selected writings focus on the seaborne adventures of Onawind Blue rather than her construction and include material that hasn't appeared here at the Invisible Workshop. The trip to Ibiza and OB's close shave with a fishing boat appear in full, illustrated with hand-drawn maps. Gavin Atkin has kindly written a glowing forward and supplied the plans for his design which are included as an appendix.

Richard Wynne has given the book a semi-coffee table format with an A5 layout and he has selected photos of OB and the sea to accompany the text. The book has been printed on A4 paper thus necessitating getting the whole lot chopped in half. When I last spoke to Dick he was just off to find a boatbuilder with a bandsaw to do the job. A more fitting way of finishing a book about a small homemade boat I can't imagine.

Not only have I had a lot of fun building and sailing OB but also writing about her. And to some extent when I became ill with cancer my solo experiences on the water helped me through. At least my memories of sparkling Mediterranean waters and a lively little hull were a place I could escape to during the gruelling days in hospital. I'm proud and pleased that my writing has been considered printable, and to see this part of my life neatly bound in book form gives me a good solid point to move on from.
Posted by Ben at 11:55 10 comments: 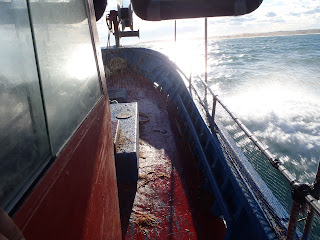 The fishermen I know are generally traditional in their tastes. And why not, when you have plentiful fresh fish and fantastic raw ingredients like olive oil, tomatoes, peppers, garlic and almonds as well as simple, timeworn recipes. I can well imagine someone having tried any species of fish 'al romescu' being reluctant to try another style of preparation. Why bother when something is already sublime. The thing is that there are many sublime ways that really fresh fish can be prepared (although there are none that can redeem long-dead ones). Olive oil is fitting in that it smacks of vibrancy and light compared with the clogging heaviness of other fats but there are times when nothing can better butter.

So when a damaged, unsaleable sole (solea solea) comes up in the net it's time to break out the butter and the flour for a classic sole meurnière. In her book French Provincial Cooking Elizabeth David praises la Mère Brazier's fine Lyonais bistro for providing what 'I do truly believe to be the most delicious and deliciously cooked sole meurnière I have ever eaten.' and goes on to question what passes for the dish in London restaurants. So despite this being generally considered a simple dish there is some historic pressure to get it right. David also astutely lists the problems of preparing sole meurnière for a dinner party in the domestic kitchen highlighting the size of the fish as one of the drawbacks. Unfortunately this is no longer quite so applicable and most soles these days (at least in the Mediterranean) will fit comfortably into a large frying pan. However, her point about using clarified butter remains valid.

Clarified butter can withstand higher cooking temperatures without burning and is easy to make in small or large quantities. Having prepared the butter the next factor that needs to be exactly right is the quantity of flour. Meurnière means miller's wife, and I find that the image of a county maiden in clogs, beating flour from her apron helps avoid coating the fish too thickly. Season the flour before lightly dusting the sole.

Heat the clarified butter in a frying pan, add the sole and cook on both sides until golden. While the fish is frying make some noisette butter. Take some normal, unsalted butter and melt it in a small pan until light brown and nutty-smelling, remove the pan from the heat and place in cold water to arrest further cooking. Transfer the golden sole from the frying pan to a warm plate, immediately squeezing lemon juice over it. Season again then pour over the noisette butter. 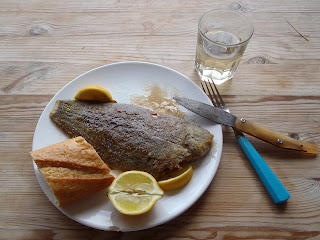