Here's a map showing the final legs of my summer trip. Silly as it is to go cruising with a schedule, I had. And the punishment was windless calm. Ghastly calm.

Offshore in engineless boats like Onawind Blue you kind of depend on the wind. You whistle for it, you pray for it and when you’ve got it you pray for it to hold. When if fails your heart sinks. It might seem futile to take up the oars when you’re still forty miles from your destination. But waiting could mean just sitting, drifting with the current for a day or two. So you row. And, fun as rowing is, you do eventually get tired. If you go beyond tired you get knackered. When you’re knackered and the wind still hasn’t appeared you somehow have to continue rowing. Sometime later you find that you’re absolutely knackered.

This island group is so small and insignificant that it barely shows on Google Earth. Columbrete Grande is the only lump of rock in this small volcanic archipelago that makes a suitable stopover. Formed by a crater, at one time the island would have been round, however, yearly onslaught from northeasterly storms have eroded the rim and flooded the crater leaving a convenient horseshoe shape. 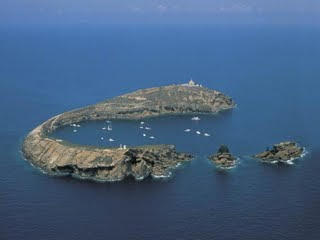 The Greeks and Romans used the anchorage but the Columbretes Islands themselves were snake infested–a feature reflected in the names Colubraria or Ophiusa (meaning snake in Latin) that appear on Roman charts. Up until the 19th century Barbary Corsairs, smugglers and fishermen had the run of the place. In 1856 intentional fires razed the scrub in a deliberate attempt to finish off the snakes and a lighthouse was built. Two families of keepers were permanently installed. The hard, difficult lives of the people who lived on the island over the hundred odd years in which the lighthouse was manned are remembered in a small museum.

The lighthouse became automatic in 1975 and the islands were put to use by the Spanish navy as a shooting range, which greatly hastened erosion. In 1988 the islands were declared a natural park and a marine reserve. Now, during the summer months, a few biologists husband the delicate ecosystem, classify the fauna and receive visiting yachts.

There are a limited number of mooring buoys spread around the anchorage and yachts approaching the islands and wanting to make use of a buoy have to call up the biologists on channel 9 and request a mooring. I duly complied and called the islands on the VHF just as the sun was setting. I was still ten miles away and the wind that had sprung up mid afternoon was beginning to fade. Soon it would be time to row again and I knew that the islands could still be up to 5 hours away. However I wanted to get the call in early as I had a special request to make. There’s no mobile phone cover on the island, which is a recommendation, but I needed to reassure my family that I had arrived. So, identifying myself as ‘small sailing boat Onawind Blue’, I radioed the island and asked if they could put in a satellite call to my home and make reassuring noises. A biologist dryly acquiesced but went on to tell me that there were no buoys available and that I would have to tie up to another boat.

The wind failed as darkness fell. And after a long three-hour row the waxing moon, orange as a piece of tangerine, set behind the southern tip of the island. There were no lights and the land was only slightly darker than the dark sky. Were it not for the lighthouse beam swinging round with regularity, its reflection reaching across the oily black water, I would have lost the island into the night.
From experience I know that it’s no fun rafting up against a larger boat, even when there are plenty of helpful crew and fenders. As I rowed into the bay at 1 am and toured the dark sleeping hulls one after the other it seemed that none were suitable. Eventually though I came across a yacht with an oversized RIB bobbing quietly behind. I tied OB’s starboard bow to the RIB’s port quarter and protected her port side with fenders. At 2 am I climbed into my bivi bag, 22 hours after leaving Ibiza. The night was far from quiet, noisy groups of seabirds were still gossiping on the rocks and one particular bird seemed to enquire, in a cockney accent, ‘Awright? Awright?’

The ways of the wind

On that first crossing to Ibiza I was lucky with the wind. 19 hours of favourable, constant force 3 to 4 is a sailor’s dream that doesn’t often come true in the Mediterranean. One of the points that comes over most forcefully when talking to other local sailors is that you can’t get by without an engine. And, judging by most sailing boats I see, the engine is the principle workhorse and the sails the auxiliary power. One sailboat owner I know will always recommend a motor boat if asked what sort of craft he considers most apt for the Med.

I’d been watching the weather on the run up to my trip and I knew that decent southerlies were on the way. Although I had a rather limited in time in which to complete the whole trip I stalled for two days to make sure my departure coincided with the shift from easterlies to southerlies. And I was lucky. The forecast was correct and the breeze held. Day after day.

I was on Ibiza making a new rudder and fighting some demons. And the wind, frustratingly, continued to blow. Couldn’t I just save a bit for later, in a little breeze bank, and cash it in when I needed it? It seemed such a waste, blowing so beautifully and me on land. And I knew it would start to fail before I made the next big crossing.

However, for the trip up to the north of Ibiza the wind held. 10 knots, over the starboard quarter, it was perfect. I stood towards the stern, steering with the tiller lines and adjusting our course slightly on the waves to favour surfing. We sailed at 6 to 8 knots hitting 10 and 11 on the waves. It was more like windsurfing than normal sailing and as sweet as it gets.

Of course, the next day when I left on the 67-mile passage to the Columbrete Islands the wind played truant and I was forced to rely on OB’s engine to power the oars.

Three months have gone by since OB’s summer trip. Long enough to get over the feeling that sea voyages in small, open boats are the height of foolhardiness. I’m now mulling over possibilities for next year, following imaginary lines on charts, weighing pros and cons and making lists of jobs to be done on the boat. But before I get ahead of myself I’ll be posting (now that I’m back online after a record 5 months waiting for a connection) material about the not so recent voyage. To start with here are some maps showing OB’s route.

This first passage, from the mainland to Ibiza, was the most testing as it entailed several long hours of night sailing in which we crossed a busy shipping lane and had to deal with a rudder failure.

The second was a short cruise to the neighbouring island of Formentera to test the new rudder.