A lambency of gaff in looms 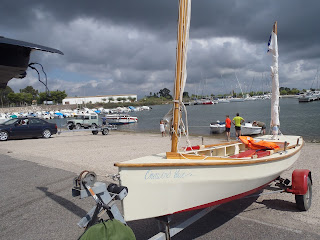 Why go to Cadaqués, I reasoned, one of the most beautiful Mediterranean towns: ex fishing village, a player in the surrealist movement, known for the astonishing quality of it's light; a technicolor clarity that contrasts exquisitely with the impenetrable black slate of the coast—sky, rock and sea all polished by the Tramontana wind. Why all this when I could go to a fag-end town renowned for mosquitos and an unenlightened attitude to bullfighting.

Solitude, in a word.

Cadaqués, at this time of year, is rife with bohemians, it's all white clothes and sandals and artistic noses held righteously aloft. And the water is the preserve of the those who think wealth brings entitlement across the board. Sant Carles de la Rapìta however, is just any old place—on the face of it. Actually it has some excellent restaurants and holds a claim to having played a significant role in Catalonia's maritime history. But I won't go into that here as I only went into town to buy ice for the cool box.

The locals may or may not be rednecks but there certainly aren't many sailors left among them. That's not to say there aren't a lot of boats. Whether they've seen you or not, don't expect anyone but yourself to change course. For self preservation alone it's worth assuming that nobody will adhere to any rules that you happen to know—take this as the principle rule for the coast in general. The port of Sant Carles is a hotbed of dodgy rope work—frayed ends and evil thumb knots abound. And the ramp is a dream for youtubers that post titles like, 'boat launch fails'. Out of charity I looked away and quietly got on with my own disastrous launch which left OB minus some bottom paint and my back out one degree to port.

I rowed out into the fray—a spritely force 3 over a short, steep chop and motor boats and jet skis fizzing about like mad wind-up toys. Anchored and hoisting the sails a boat hurtled by raising a low wall of wake that made me sit down fast. I gazed after them but none looked back so I assumed they weren't buzzing me to watch my boat wildly roll but were unaware of being boorish and uncivil. Most boats chose to stick close to the shore and, under full sail, I was soon in clearer water.

El Port dels Alfacs is a parallelogram-shaped body of salt water running more or less east west, Sant Carles being on the northwestern edge. The long spit of 'El Trabucador' protects the bay from the sea, swinging westward to form 'El Punta de la Banya'. I spent the afternoon tacking up to the northeastern corner where I got stuck in weed and mud. But here running aground is all part of the sailing and in a craft like OB, where you simply climb out of the boat into ankle deep water to lighten the hull and thus refloat, it is not a problem. A fixed-keel sailboat was in far deeper trouble than I and a motor boat was churning great gouts of mud skyward with no forward progress. In waters less thin I again lowered the rudder and sailed clean away from this treacherous corner.
La Punta de la Banya is a nature reserve and is all but inaccessible except in a shallow draft, flat-bottomed boat. Scrub and the odd tree were becoming silhouettes by the time I arrived and I cautiously approached a tiny beach, letting the boat skid sideways with no centreboard or rudder, making minor adjustments to the course, poling with an oar.

As the bow ground gently against the shell laden shore I was surprised to see a row of discarded umbrellas and walking sticks upright in the mud on the far side of some tall grasses. I hopped out of the boat to investigate and the umbrellas opened and took flight.
A flamboyance of flamingos. 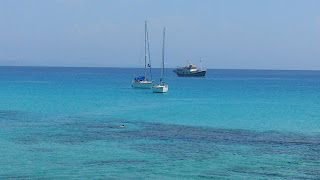 I like fish, I'm interested in them both underwater and on my plate. I have a reasonable knowledge based mainly on experience, shored up with solid facts from the wikipedia and fishbase.org. I'm always eager to learn about the sea and its inhabitants.

As with the birds I have the local fish identified, the ten common or garden species and the rarer ones. The ones that I know I might see but hardly ever encounter. And others, that although they turn up on the fishmonger's slab having journeyed from afar, are almost things of legend, like the dusky grouper (Epinephelus marginatus).

A new sea floor over which to snorkel brings the pleasure of anticipation. I have discovered just how painful is the poison of the weever fish (Trachinus draco) and how enduring the discomfort of the Pelagia noctiluca jelly fish sting. I've watched bluefish (Pomatomus saltatrix) hunting anchovies and have even been checked out by a pair that followed me for many metres, sniffing at my toes. I have caught octopus (Octopus vulgaris) and felt the pinch of their parrot-like beaks.

Recently, in Formentera, floating 10 metres or so above a barren bottom I saw an old rudder lying on the sand. A wrasse was hovering around one edge, often a sign that an octopus is in residence as the diminutive wrasse makes meals of pedators' scraps. I emptied and filled my lungs a few times then dived down, holding my nose and blowing every 2 or 3 metres to compensate the mounting pressure. I looked underneath the rudder, no octopus but another predator; a triggerfish, about 40cm long, bold and ugly.

I didn't hang about. I knew the triggerfish to be aggressive and I was running out of oxygen anyway. At the surface I hung in the water breathing. Suddenly I felt something grab my foot, I turned with a great flurry of limbs and saw the triggerfish clamped upon the knuckle of metatarsal behind my left little toe. And it didn't want to let go. I shook my foot hard and shoveled water at it, the fish backed off a bit. Then it came at me again. I kicked and pushed bubbles, my only defense. It had a particularly calculating stare and it looked at me coldly as it followed my messy backpedalling towards the boat from which I'd dived. After a while it desisted and I examined the two small holes on the top of my foot that were leaking blood into the water. It wasn't a serious wound. I climbed aboard wondering just why the fish had given me such an evil reception.

On the internet I confirmed that the triggerfish is indeed a cantankerous blighter, with a powerful jaw and sharp teeth but, more interestingly that it becomes defensive when protecting eggs. Even more interesting was the discovery that the fish's territory has the shape of an inverted cone, the apex at the bottom and the broadest part at the surface. So, if you encounter a triggerfish on the bottom and he doesn't look happy you should swim away horizontally. My mistake was to ascend and as I rose I further trespassed on his patch. On the surface above the nest I was bang in the centre of the fish's territory and as such a threat that needed to be dealt with.

I applaud the trigger's cojones and treasure my new fishy knowledge—I won't forget that icy stare—as well as the pin prick scars on my foot. 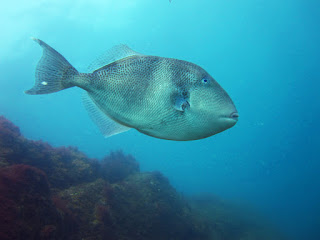