This Thing of Darkness

I found the book of this title by Harry Thompson (2005) captivating. Until now I'd been familiar with the history of Fitzroy's voyages from many sources including Alan Moorehead's Darwin and the Beagle. This had given a clear account of the second voyage, with Darwin, and good pictorial evidence, but its text and characters remained somewhat dry and fixed in the past, as I suppose befits a serious work of non-fiction. Thompson's is a historical novel and the frontispiece reads, 'This novel is closely based upon real events that took place between 1828 and 1865.' A warning that he is affording himself some artistic license.


The result, however, has brought me closer to Darwin and Fitzroy than anything I have read. Thompson is a fine storyteller and weaves a page-turner of a yarn. It's not Patrick O'Brian but at times it comes pretty close, particularly through the dialogue and the naval routines. Anyone versed in O'Brian will find them gratifyingly familiar. Just as with Aubrey and Maturin, the brilliantly depicted relationship between Fitzroy and Darwin provides much of the pleasure. Their shared passions and unquenchable appetites for discovery are common ground for a deep affection, though the conclusions that each draws from the discoveries made during the Beagle's five year circumnavigation eventually decimate their friendship. But this is only part of the tragedy.

Fitzroy is the hero of Thompson's novel and he is painted as great man and a product of his age. Darwin's character could conceivably be extrapolated to the present, a passionate amateur naturalist on the brink of a cohesive theory. But Fitzroy, chivalrous to a fault, driven by high morals, unswerving Christian faith and duty to his king and country surely belongs to the 19th century. Though historically his values found their most horrendous expression in WWI.

Although Fitzroy is treated dreadfully by his country his intent is always to serve and when his orders contravene his faith he strives to maintain his Christian integrity, thus leading to disfavour with those in power. His is a crummy lot. Fitzroy was a manic depressive, though the condition was yet to be described and recognised, which must have made facing his dilemmas all the more difficult. It is no surprise that he ended his own life, that he survived until he was 59 is testament to his determination in the face of continual let down.

Many of the questions raised in the book feel contemporary. Darwin travels with the gauchos in Argentina. When he meets General Rosas—who is engaged in a genocidal war with the native indians—Darwin finds that despite the brutal reality of the war the General's discourse is convincing. Thompson based Rosas' arguments on speeches made by Tony Blair and G.W Bush to justify the 2003 invasion of Iraq. Themes of western expansionism are just as valid today as they were in the 1830's.

Fitzroy actions helped to further understanding and knowledge of the world but he considered that what he and Darwin had set in motion brought civilization not only forward but beyond him, to a godless society where men questioned God's works without having witnessed their full might as he had around the Horn and in Tierra del Fuego.

Does the world improve through progress? Fitzroy asks. A question that we could well pose today. More people are better fed than ever before, we have hot water, flushing toilets, the Wikipedia, I myself have been successfully treated for a life threatening disease. But we also have extreme inequality, horrendous poverty and exploitation, slavery even. Technologically we advance but the human condition, the greed, the short-sightedness and the corrupt system that so distressed Fitzroy, exist just as they did 180 years ago. 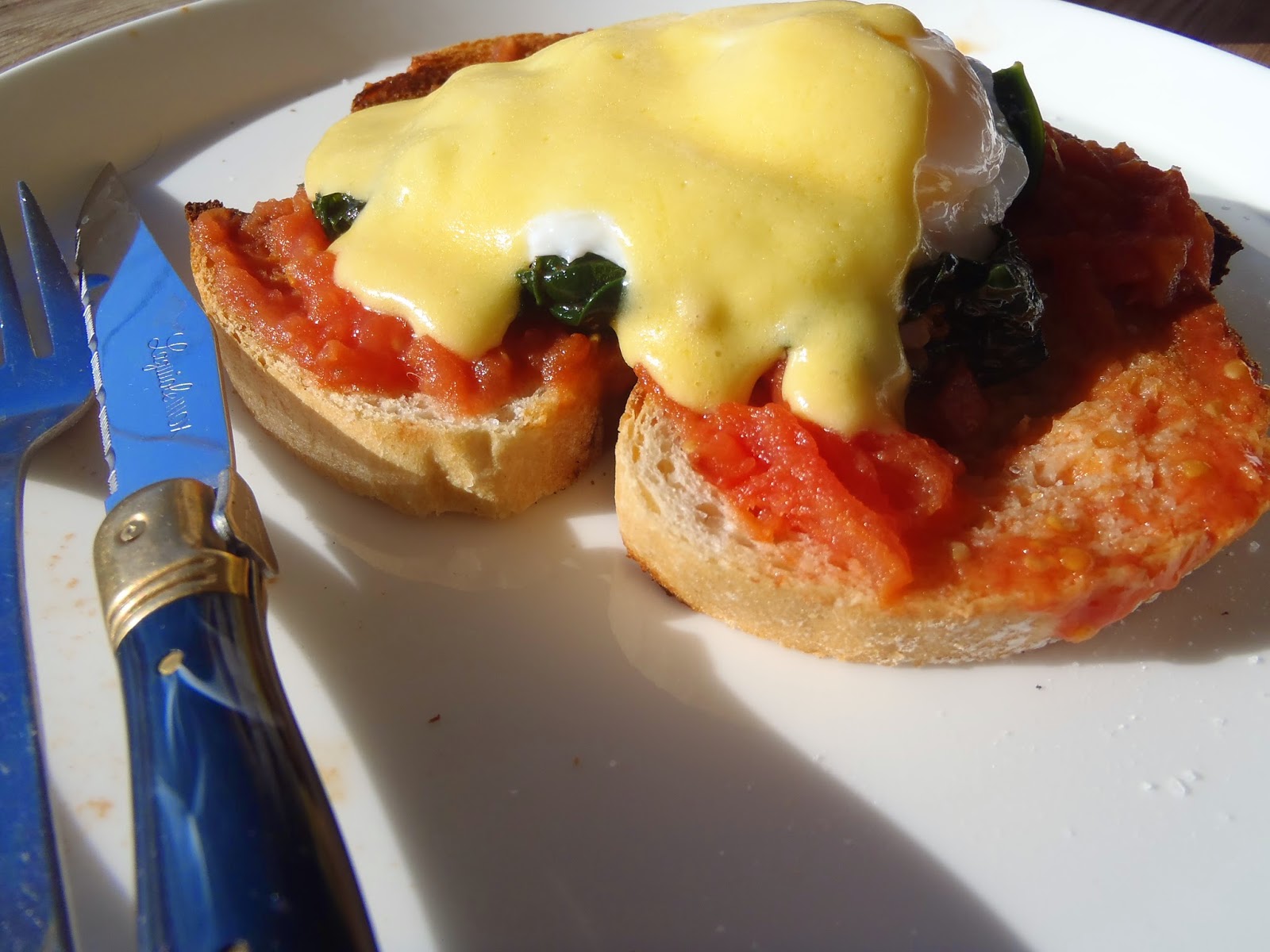 Not a shipboard meal and a treat even on Fiddler's Green, eggs Benjamin is my version of eggs Benedict. The name change may smack of narcissism but honestly, in the world of food nomenclature can get you into hot water. Just to clarify the territory on which I'm about to tread, eggs Benedict feature a toasted English muffin topped with a thick slice of warm ham, a poached egg and hollandaise sauce. Eggs Florentine exchange the ham for spinach, and eggs Royale use smoked salmon in lieu of ham.

Eggs Benjamin takes a few local ingredients (there are no English muffins in these parts) and marries them with the classic combination of poached egg and hollandaise sauce. I'm helped in this recipe by two important aspects garnered from my sailing experience. The first is energy and enthusiasm, there's no point embarking on eggs Benjamin if you are fuddled and hungover—though if someone else makes it for you and serves it with a Bloody Mary you'll probably find that it's an excellent cure. Energy, enthusiasm and a clear head, the sort of organisational attitude that you need at a busy boat ramp, when you're launching the boat while you mentally tick off all the gear. You don't want to shove off from the shore and discover you've forgotten the centreboard as I once did.

The second concerns the hollandaise. This sauce scares off a few home cooks but all that's required, apart from the correct ingredients, is an air of mild confidence and authority. The same that you might assume when you take your boat right up to the quay or breakwater—onlookers expecting a nasty crash—before smartly tacking, because you know that your boat turns on a penny and are absolutely confident that you won't fluff the manoeuver. 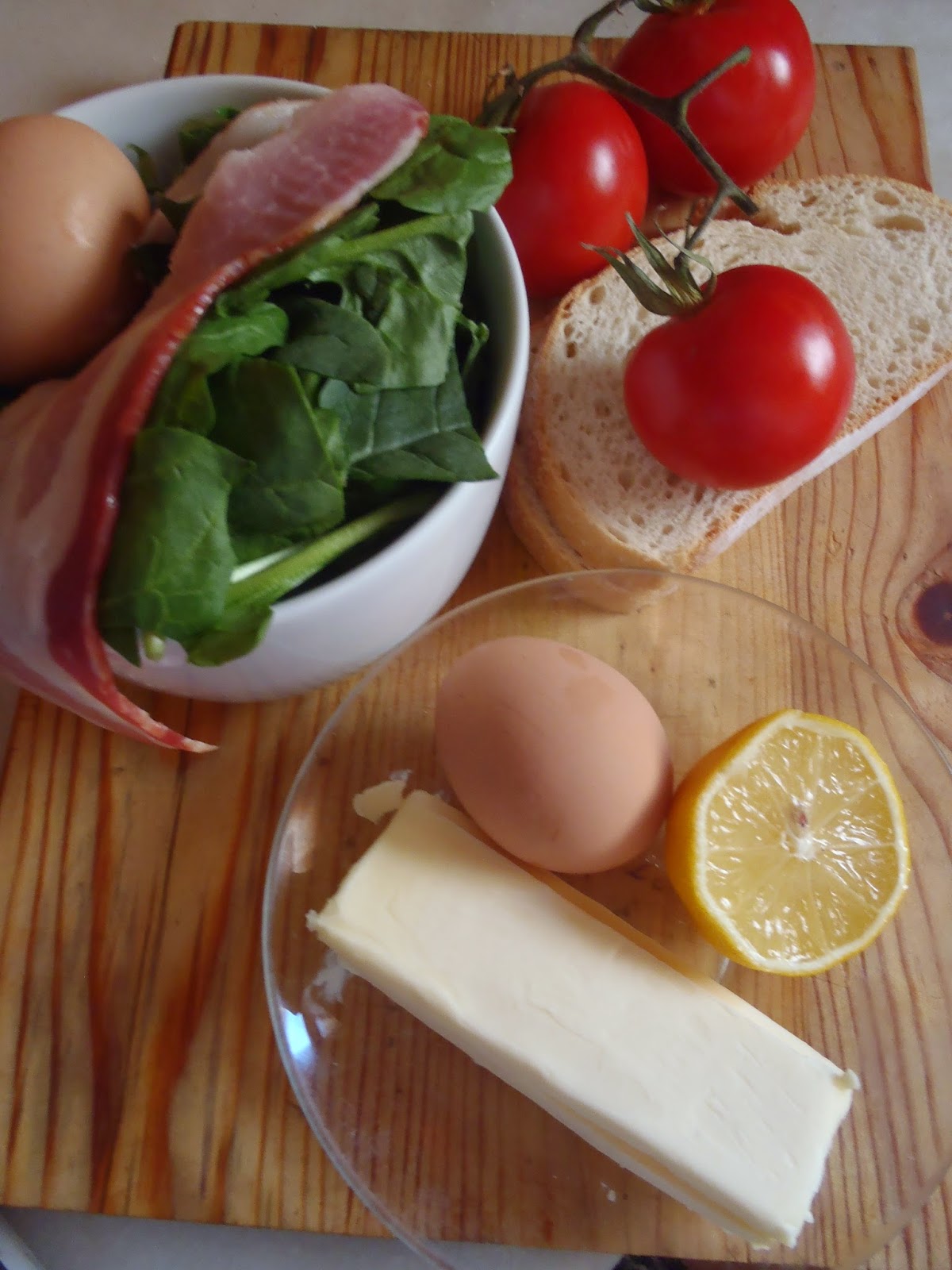 For want of sailing stories I will give the recipe.

Take a ripe tomato and remove the root of the stalk with a conical cut then draw a sharp knife around the skin. Slice the tomato in half and place in a moderately hot frying pan skin sides down with a few drops of olive oil. Put a small pan of water over a flame, this is the same pan and water in which you will eventually poach the egg but first place a bowl on top of the pan containing 75 grams of unsalted butter. Let it melt. 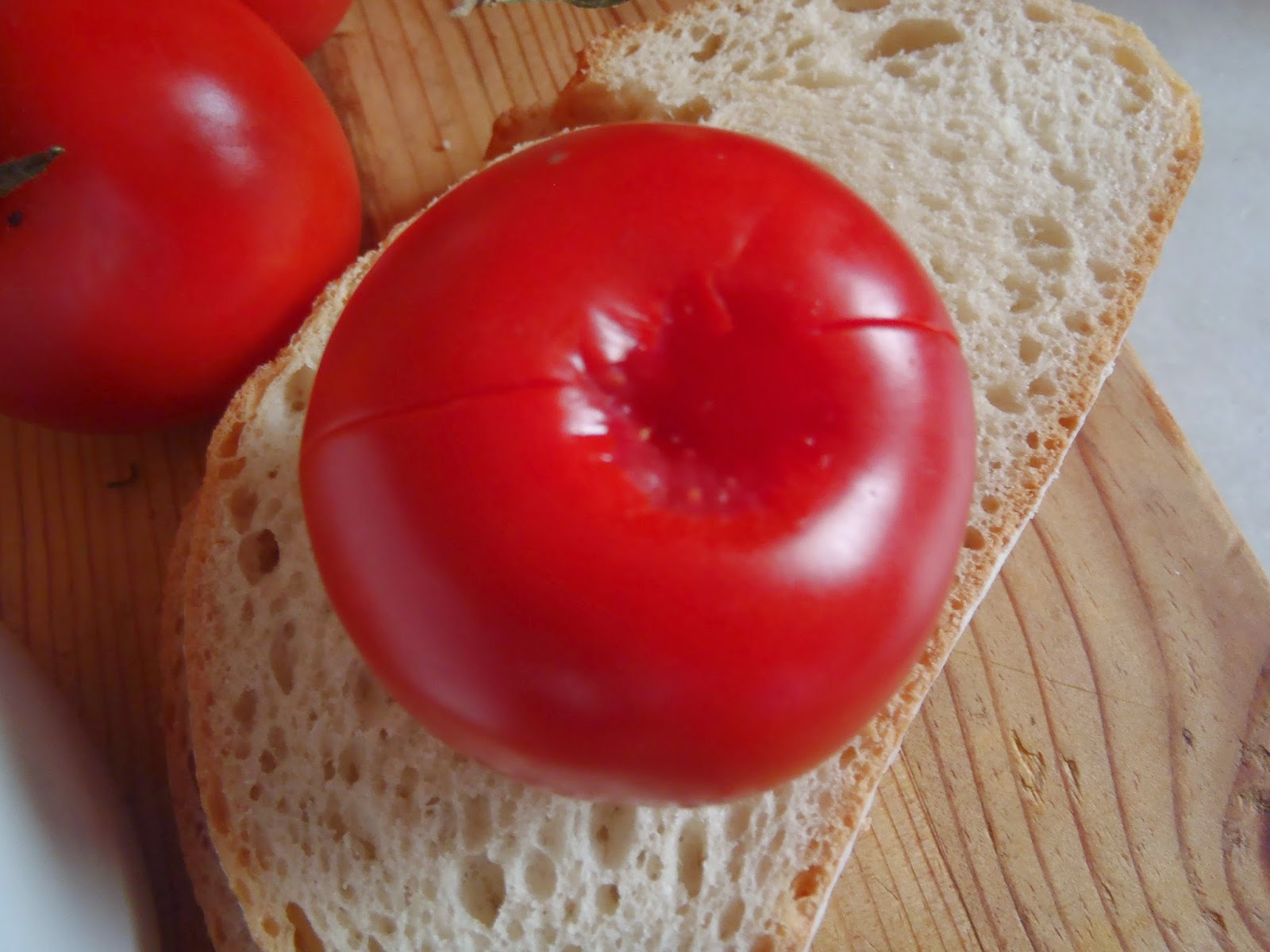 Cut the bacon into small pieces and add to the frying pan with the tomato halves. Start the hollandaise by separating an egg and putting the yolk in a clean bowl with a couple of spoonfuls of cold water and a pinch of salt, combine with a whisk. (I forego the vinegar that is often used at this point as it brings the flavour too close to béarnaise for my taste.) Remove the melted butter from over the pan of water. 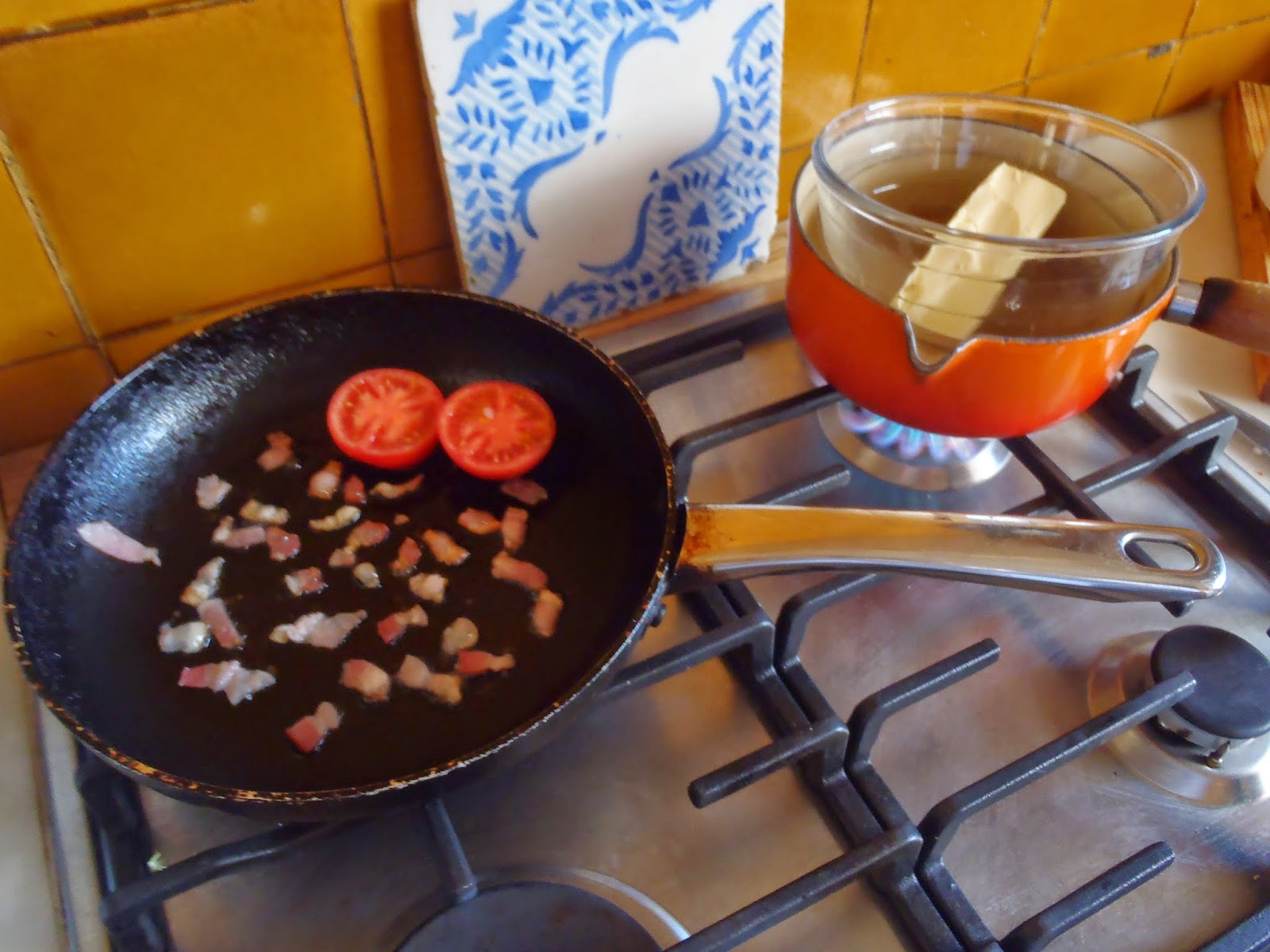 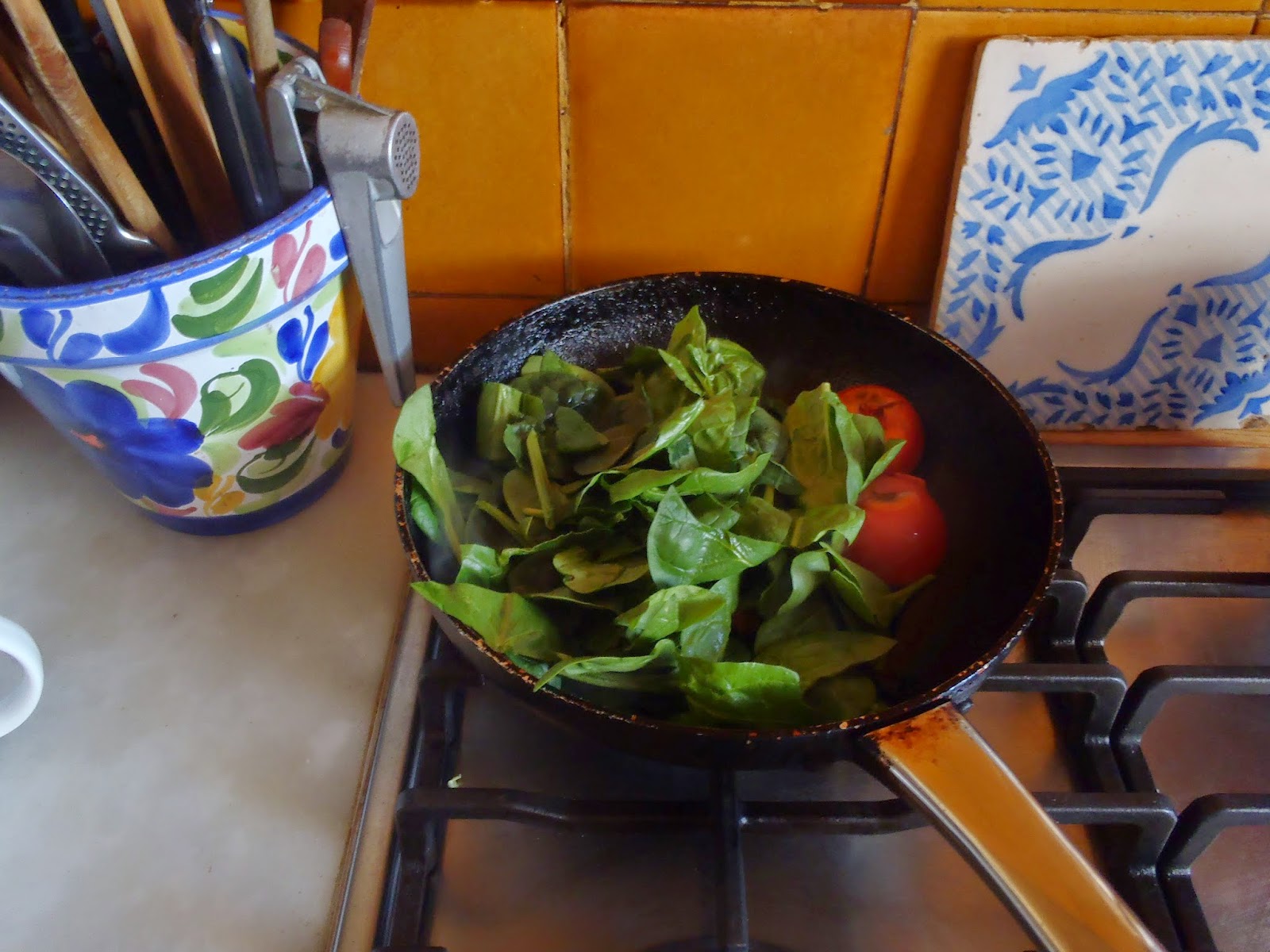 Add the spinach to the bacon with some salt and pepper, turn the tomatoes and cover with the plate that you will be using to serve the meal. Turn the heat right down. Put the bread in the toaster, while it toasts take a minute to assume an air of mild confidence. Put the toasted bread on the plate over the spinach to keep it warm. 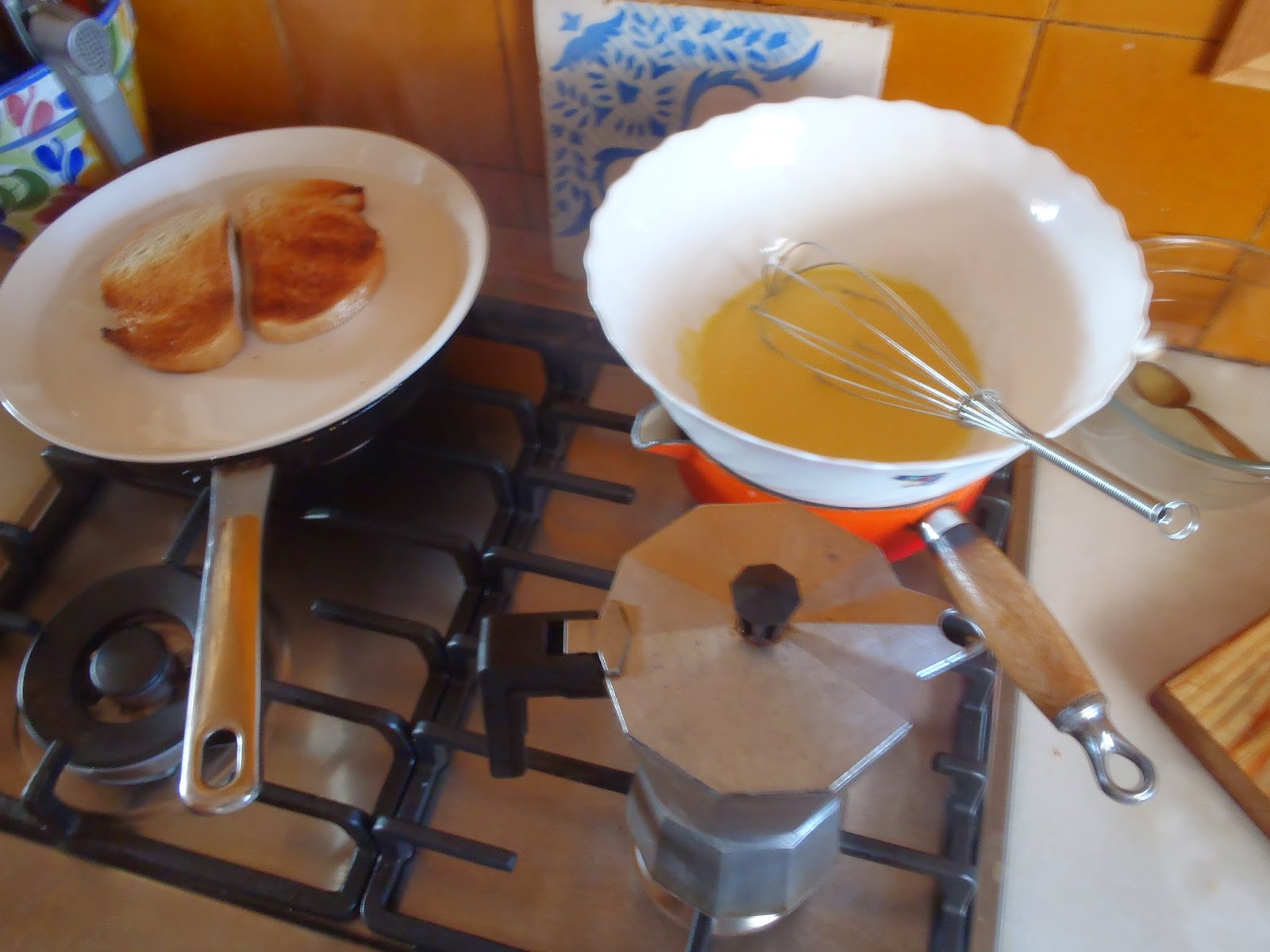 Place the bowl containing the egg yolk over the pan of simmering water and continue to whisk. When the bowl is hot to the touch but before the yolk begins to cook add the melted butter little by little, whisking as you go. Keep going until the sauce starts to thicken, it should only be thick enough to coat the back of a spoon, add a good squeeze of lemon juice, whisk vigorously and remove from the heat. Leave by the hob to keep warm.

Crack the other egg (as fresh possible and at room temperature) into a glass. Stir the simmering water with a wooden spoon to create a vortex and gently tip the egg into the centre. Ensure that the water doesn't come to a rapid boil. While the egg poaches, remove the plate from over the frying pan, place the tomato halves on the toast and remove the skins—they should come away easily due to the cuts. Using a fork crush and spread the tomato on the toast, salt to taste. Place the bacon and spinach mixture on the toast (all the moisture will have evaporated, if not whack up the heat until it has). Now check your egg, it should have centred itself in the pan and cohered. Lift it gently with a slotted spoon or similar. Let your egg drain. Sloppy, wet eggs are the dearth of this sort of breakfast. Place the egg on the spinach and, with a generous hand, spoon hollandaise over the whole. 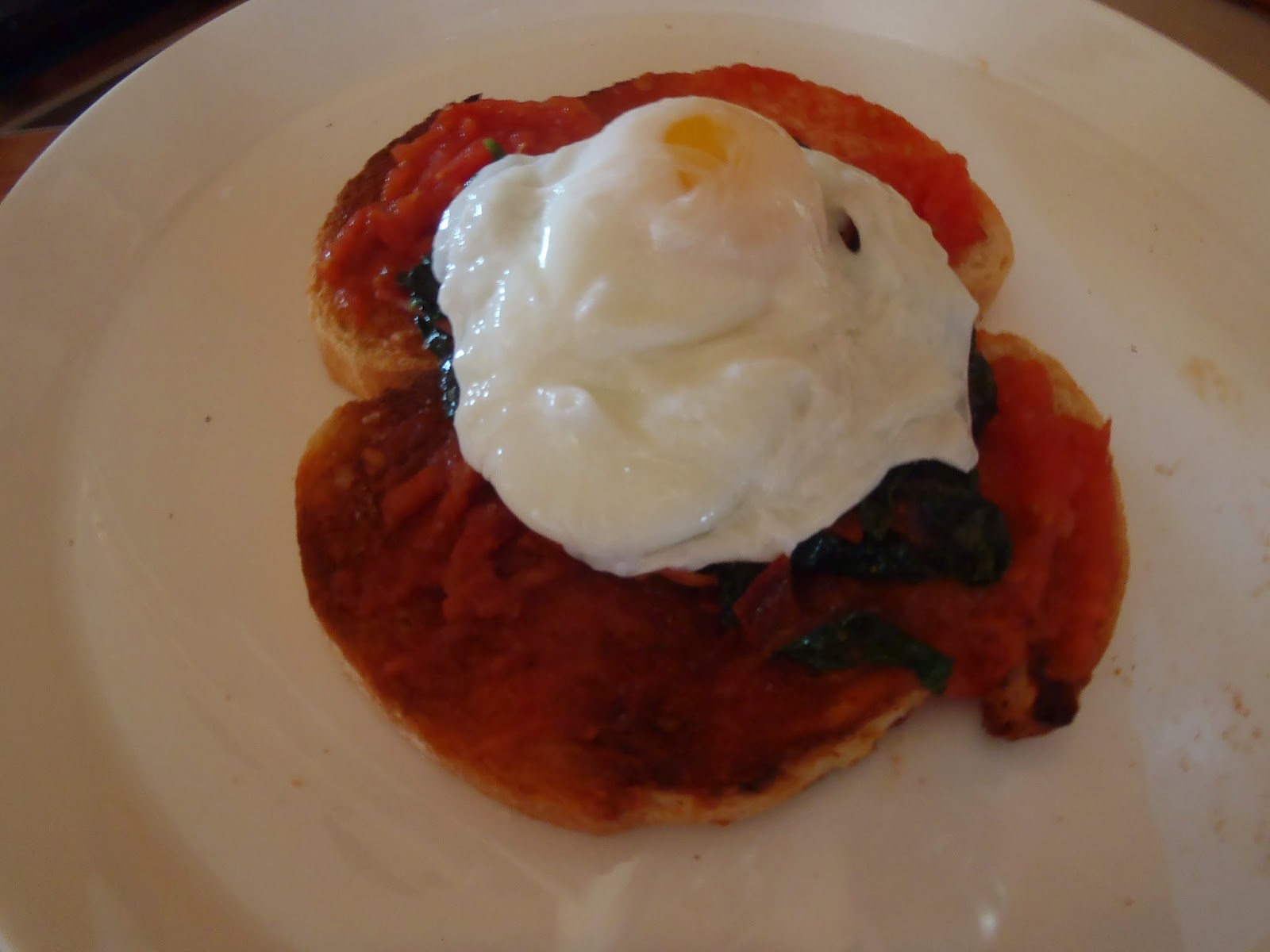 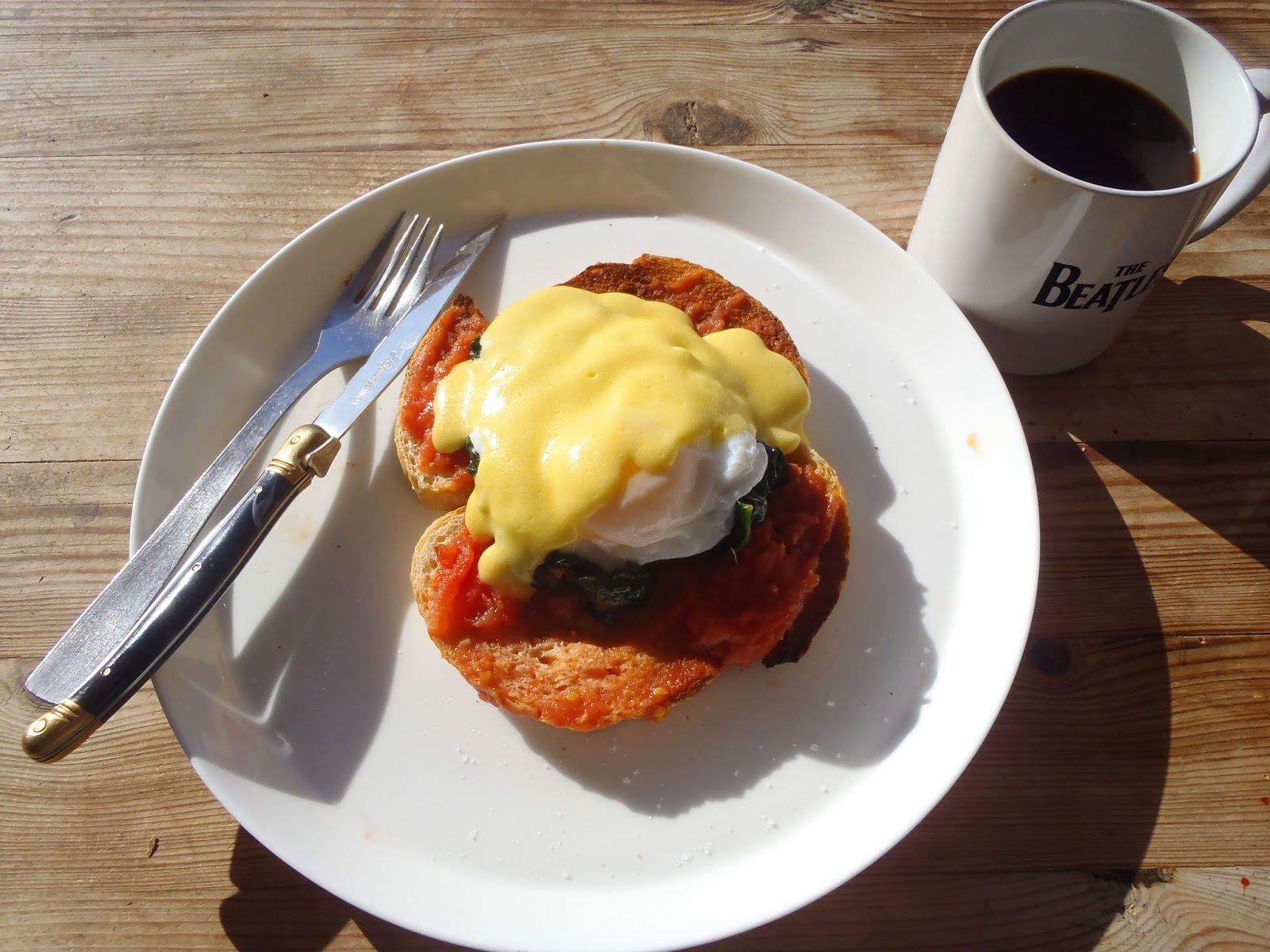 Best accompanied with hot, black coffee, the Bloody Mary can wait till cocktail hour, though mine's a Dry Martini.


NB. One egg yolk and 75 grams of butter will make enough hollandaise for two or three people. Put left over sauce in a glass, cover with cling film and store in the fridge. When you've used up the calories accrued at breakfast slowly reheat the hollandaise in a bain-marie and spoon it over a seared fillet of fish and some steamed asparagus. Now you can be sure you've had your ration of butter for day.
Posted by Ben at 17:01 2 comments: