This season's treat from Sam Llewellyn contains an article of mine about octopus. How to catch them--and what they do to evade you--how to dispatch them quickly and how to prepare them for the pot.

As I've said elsewhere on this blog the octopus is an extraordinary creature and one that I find endlessly fascinating. Initially the article started as a way for me to organise all the information that I'd accumulated about octopus, from observation, reference and fishermen. As I started to write I began to see that I could fit the whole octopus story into the tale of catching one.  So that's what you have, all the details of diving for octopus in this summer's MQ.
Posted by Ben at 21:23 2 comments: 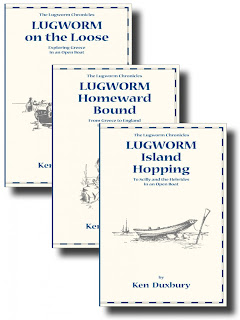 I have been enjoying the first of the Lugworm Chronicles—Lugworm on the Loose by Ken Duxbury. Lodestar books has published the trilogy that, despite popularity when first published in 1973, had gone out of print. And just as well, for Lugworm on the Loose is a classic that deserves resurrection and one that any small boat sailor or dreamer will enjoy. The books have beautiful, satin smooth hardback bindings, lovely paper and crisp print with pen and ink illustrations by Duxbury himself.

Ken and his wife B (we never get to know her full name which has the effect of keeping this evidently tough and resourceful women somewhat in the background) trail their Drascombe Lugger out from under piles of tedious work and grey skies to sunbaked Greece. Aboard Lugworm they plot a winding route from Volos, avoiding the marauding Meltemi wind, to the Sporades and the Cyclades before taking the Corinthian Canal to the Ionian and finally to Corfu. Ken's writing depicts a peaceful Greece before the tourist boom wreaked havoc amongst the islands but you have to read between the lines to thoroughly grasp the sailing challenges they faced. Ken and B's britishness gives rise to some unintentional humour but is ultimately endearing. (They continually conform to Noel Coward's stereotype and, like mad dogs, set off for long walks in the blistering mid-day sun.) The book also contains some fascinating snippets concerning the local fishing practices. I particularly enjoyed an episode describing a technique for catching octopus.

Ken and B are in a bay near Korfos, in the Saronic Gulf just before entering the Gulf of Corinth. Wind bound they prepare for a day of sunbathing in the lee of an olive grove. Their peaceful morning is disturbed by a shepherd coming down the hill carrying a long pole with a bunch of sage leaves attached to one end. Ken watches as the shepherd, standing on a rock, sprinkles some drops of olive oil on the water and then submerges the leafy end of the pole and beings gently jigging it up and down. The shepherd, watches, waits and jigs to Ken's fascination until an eel-like form coils out from under a rock and then retreats. The shepherd, keeping the leaves undulating, moves the pole closer to the rocks as Ken peers down perceiving a feature that looks remarkably like a human eye set in a large brown blob. More tentacles appear and suddenly the sage is embraced by an octopus. The shepherd jerks the pole skyward and up comes a two-kilo octopus impaled on large barbs hidden in the bunch of leaves. Inserting a knife between its eyes the shepherd dispatches the creature and then disengages it from the hooks. He goes on to beat it on the rocks, Ken counts 75 times, before turning the head inside out and declaring 'Kalo'—it's good. Ken and B however, despite witnessing the Greeks enjoying octopus never quite overcome their mild revulsion.

I have never heard of this method before though it has some similarities with a Catalan practice in which a small rectangle of wood with weights on the underside and three large hooks on the top, baited with sardines or chicken is slung into the briny attached to a long line. The fisherman standing on the dock or in his boat slowly pulls in the line. Even in daylight an octopus can't resist the smell of a chicken carcass and will rapidly quit its cave to sink its beak into the meat. Nowadays beating the creature on the ground is not necessary (unless you're in a hurry to eat) as 24 to 48 hours in the freezer is enough to tenderise the flesh.
Posted by Ben at 21:20 5 comments: 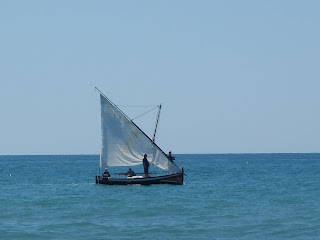 When I first started planning cruises on the Catalan coast, rather than studying a pilot book, I looked to the Catalan nautical writers who, though writing sometime in the past, used language that I could readily absorb. Two writers stood out—Josep Pla and Carlos Barral. Both sailed extensively on this coast from the '40's to the '70's and as I lapped up their prose I began to feel an almost personal attachment to them. While Pla was paused, detailed, literary and enjoyable purely for his masterly use of the Catalan language, Barral described sailing and the coast with larger, more spontaneous brush strokes and his vivid colours reflected his passionate nautical spirit.

Pla died in 1981, his boat 'Mestral' long lost to scrap. Barral died in '89, and his boat 'Capitan Arguello' ended up in Tarragona's 'Museu del Port.' Barral was from Calafell, just round the next headland from OB's beach, and the dedicated souls of the association 'Pati Catala Calafell, Mar Mitic, Mar Ludic' have striven to return Barral's boat to its home beach in Calafell. But for all the negotiations Tarragona Museum hold tightly to the treasured Capitan Arguello. So the association studied the possibility of building a replica but that plan unsurprisingly was beyond their budget. They did the next best thing, found and restored a deteriorating llaut which, though of smaller dimensions, they painted in Capitan Arguello's distinctive black and orange colours and named La Carlos Barral. 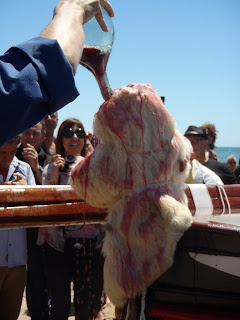 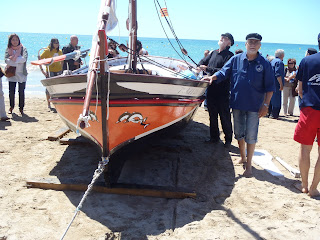 I went along for the launch ceremony and arrived in time to see the boat chugging out of the port, running parallel to the beach to the place on the sand where the ceremony was to be held. Conducted by Vicente Garcia-Delgado, author of the definitive book on the lateen sailing rig—Nuestra Vela Latina—and historical expert of Mediterranean sail the ceremony recreated the pagan rites that mariners hoped would appease the fates. With fitting pomp and deliberation Vicente burnt a potful of olive branches under the prow, dressed the stem head with a lamb's fleece and bade the 'patron' soak it with wine, then he doused the boat in sea water followed by coarse-grained salt. Finally, moving into christian territory, the boat builder responsible for the restoration nailed a gold coin to the mastfoot to pay St Peter for entry into heaven should the boat founder. Then a virgin climbed aboard with a cross to be placed inside the boat at the bows. With the fates and deities suitably catered for the La Carlos Barral could begin her career. 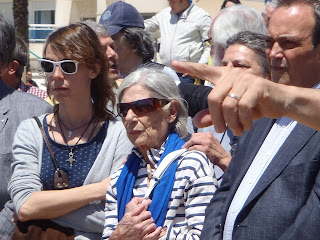 Dawrfed by the local dark-suited bigwigs attending the occasion was the pettite guest of honor Yvonne Barral, Carlos Barral's widow, accompanied by her children and grandchildren. While she waited for the local radio station to sort out its signal I introduced myself and explained the role her late husband had played in my personal sailing story. As occasionally happens when I talk about Onawind Blue ears pricked to the simple tale of a small boat on the sea, but now I was more than flattered that this elegant lady who had sailed many miles with her husband might be interested in my adventures. Emboldened I pulled my book from my rucksack and showed it to her. As she flicked approvingly through the pages I felt that quite unexpectedly I made a significant connection with part of Catalonia's literary and maritime heritage.
Posted by Ben at 17:02 2 comments: