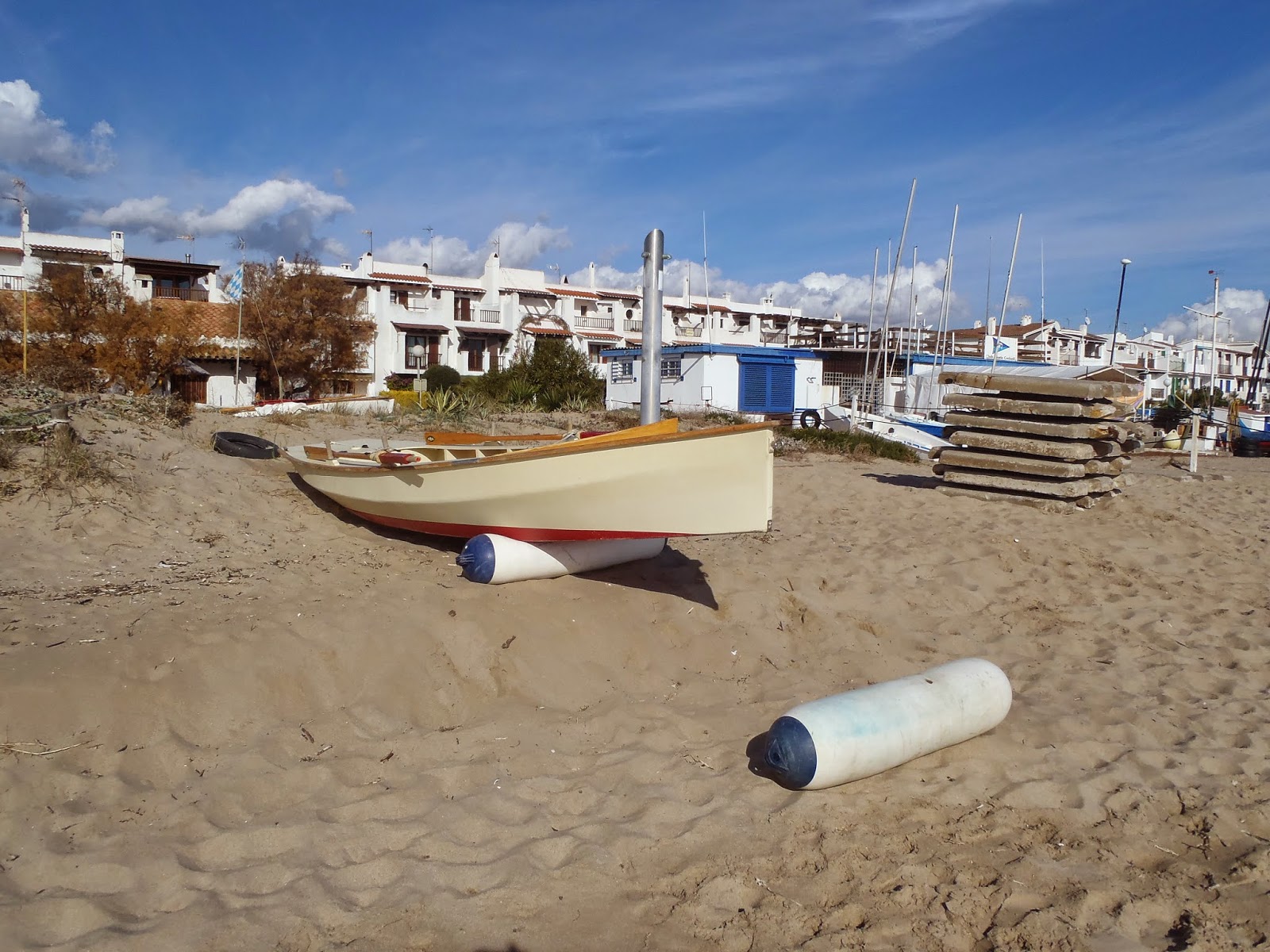 Though much conspires against it, solo sailing is still my aim. No longer the muscled, younger man of my earlier sailing days I need some help on the beach moving Onawnd Blue to the water and back, particularly when there is some urgency to get her out of the waves. Passers-by are undependable, difficult to control if once they get their minds fixed on the idea of moving the boat, and sometimes downright dangerous. And reliable crew, well...

As I've so often found it is better for all concerned if I am independent. To this end I decided to make some blocks and asked my stepfather Bob to turn some oak sheaves. This he did with surprising alacrity given the temperature of his workshop on the welsh borders. 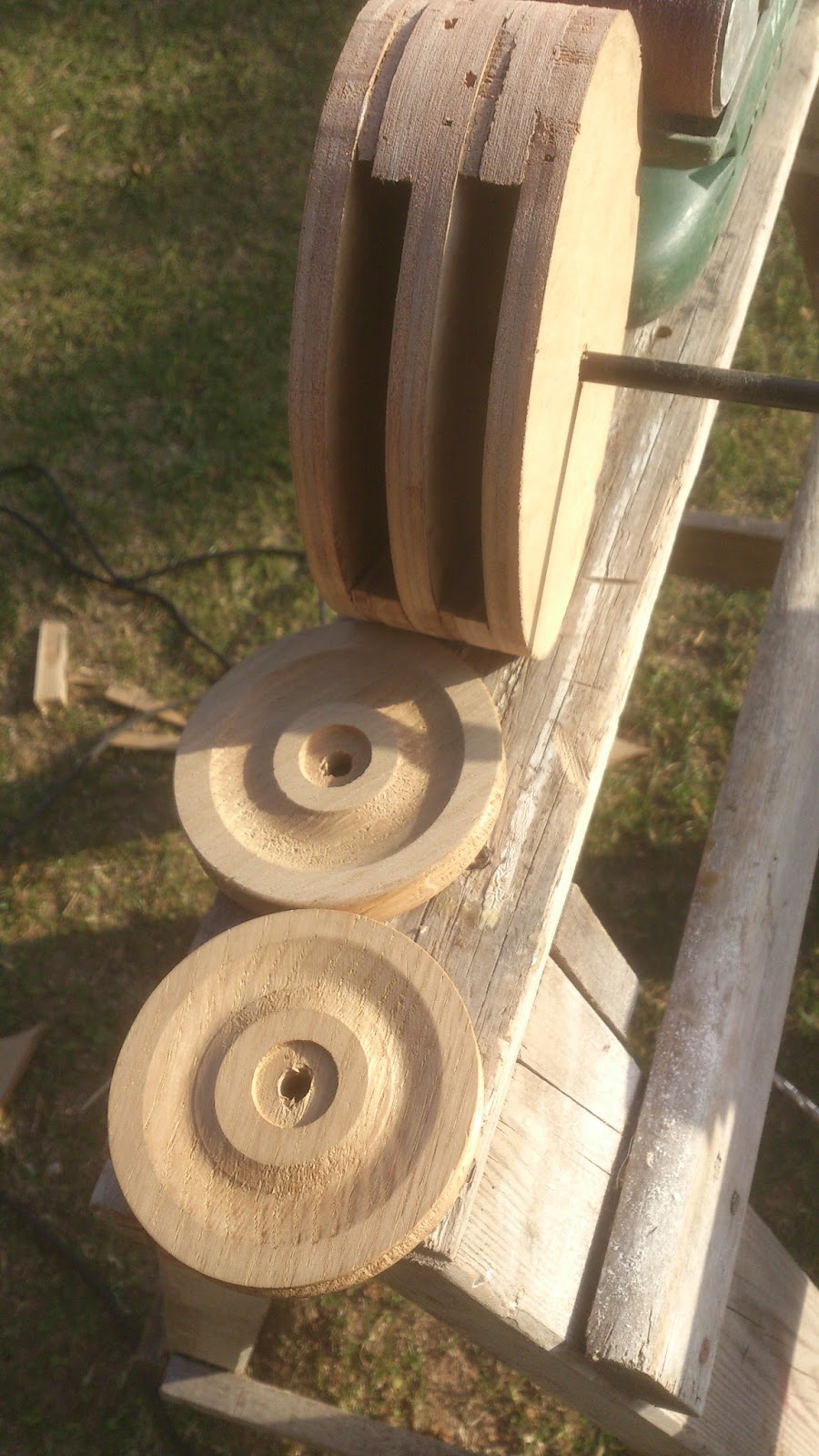 Most of the tools in the Invisible Workshop have rusted or become irrevocably blunt but at least the belt sander can be relied upon to munch unappeasably through soft woods. Thanks to this, plenty of filler and some ropework in the evenings, I bungled together a pair of blocks. 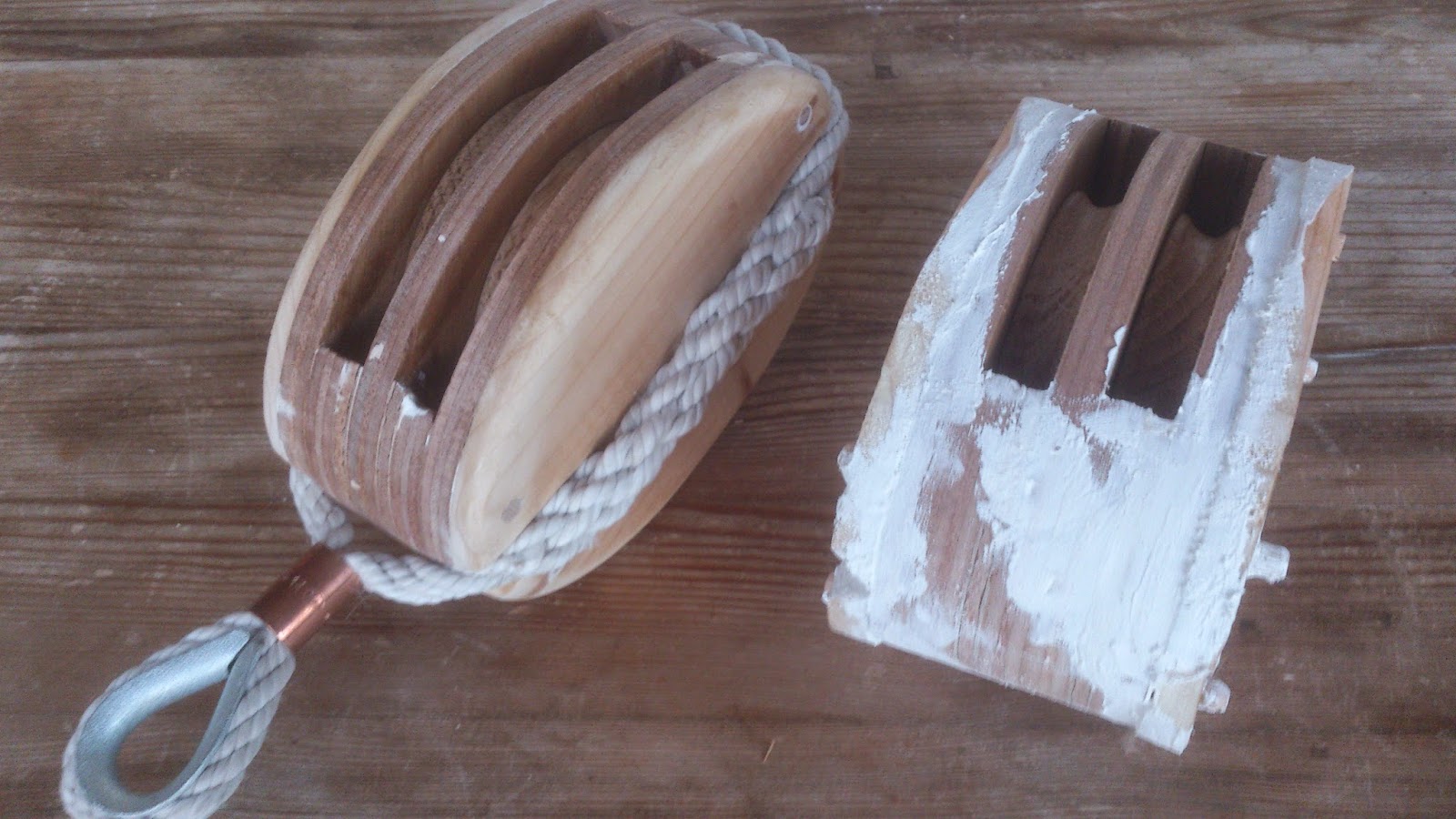 I let some bad weather pass through and with only a few little waves remaining decided to test it. All my calculations had been based on the merest speculation so I had no idea if a 5:1 reduction would be sufficient, or a 9 cm diametre sheave or an 8mm fibreglass axel made from an old flexible tentpole. With this reassuring level of uncertainty I made for the beach with the blocks, a tangle of assorted lines and the dog. (The only family member to show any interest in witnessing what might evolve into a minor nautical disaster.)

I set up the tackle as I thought best and left it laid out on the sand for my return, then rowed out through the waves. Sharper and more powerful than they appeared from the beach, not to say wetter, a couple of waves came rowidly over the bow. I rowed in circles waiting for onlookers to stop examining the blocks or devine whether the dog, who'd set up a desolate whinning, was lost, before pointing the bows at the waiting tackle. 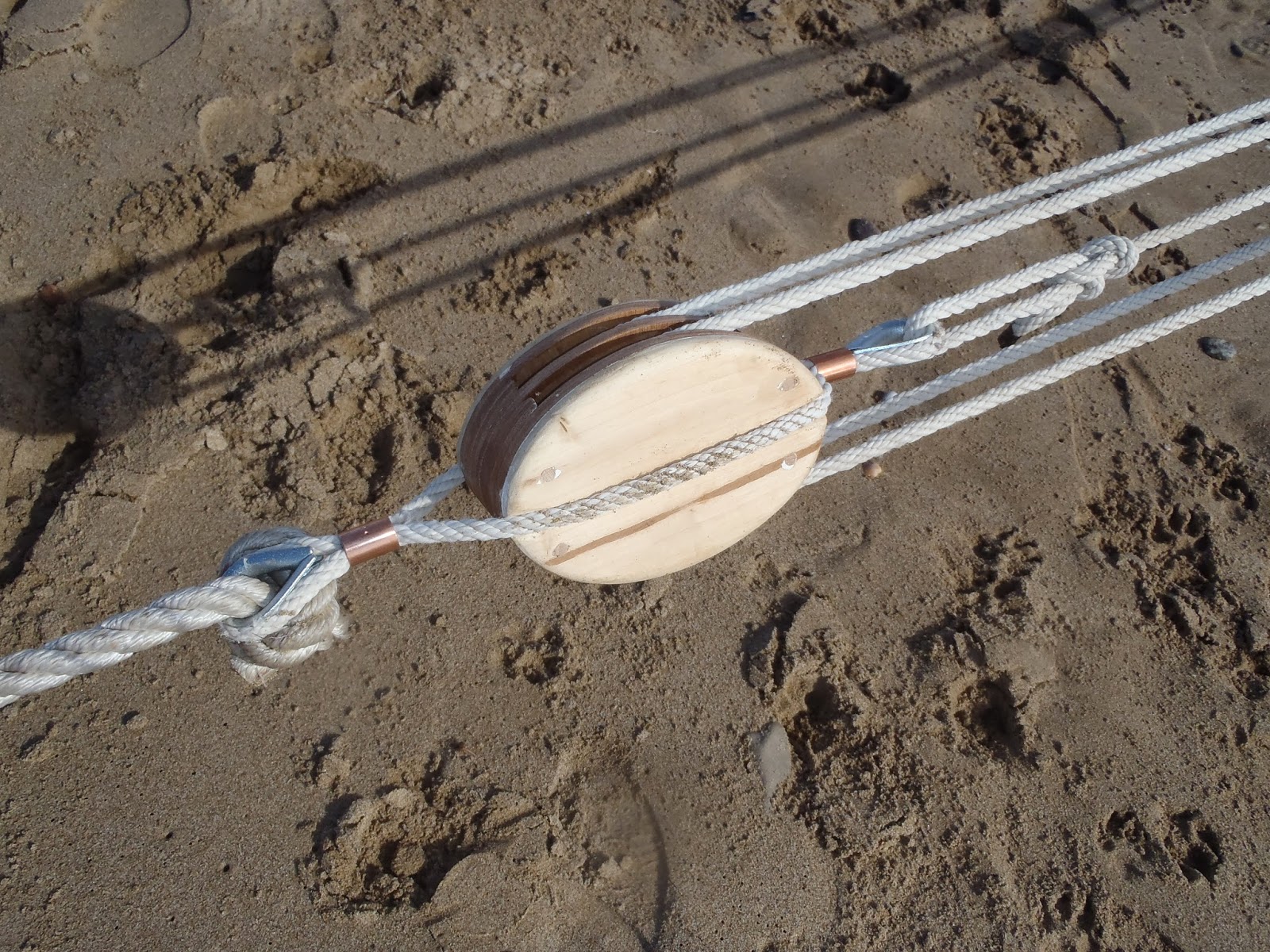 My aim was good and I'd waited for a gap in the sets of waves but the boat made as if to broach on the first wave and was pushed off downsea at a dangerous angle. My adrendaline up I flailed at the oars to right OB and got her stern on to the next wave but again she tried to broach and slewed off side-on to the next breaking wave. Surely a capsize, but no, I earned a soaking but kept her righted by getting my wieght on the rail. I flailed again and her bows ground on the sand. I hopped out, immediately grabbing the eyelet on the bow to avoid her being dragged off by the backwash from the waves. 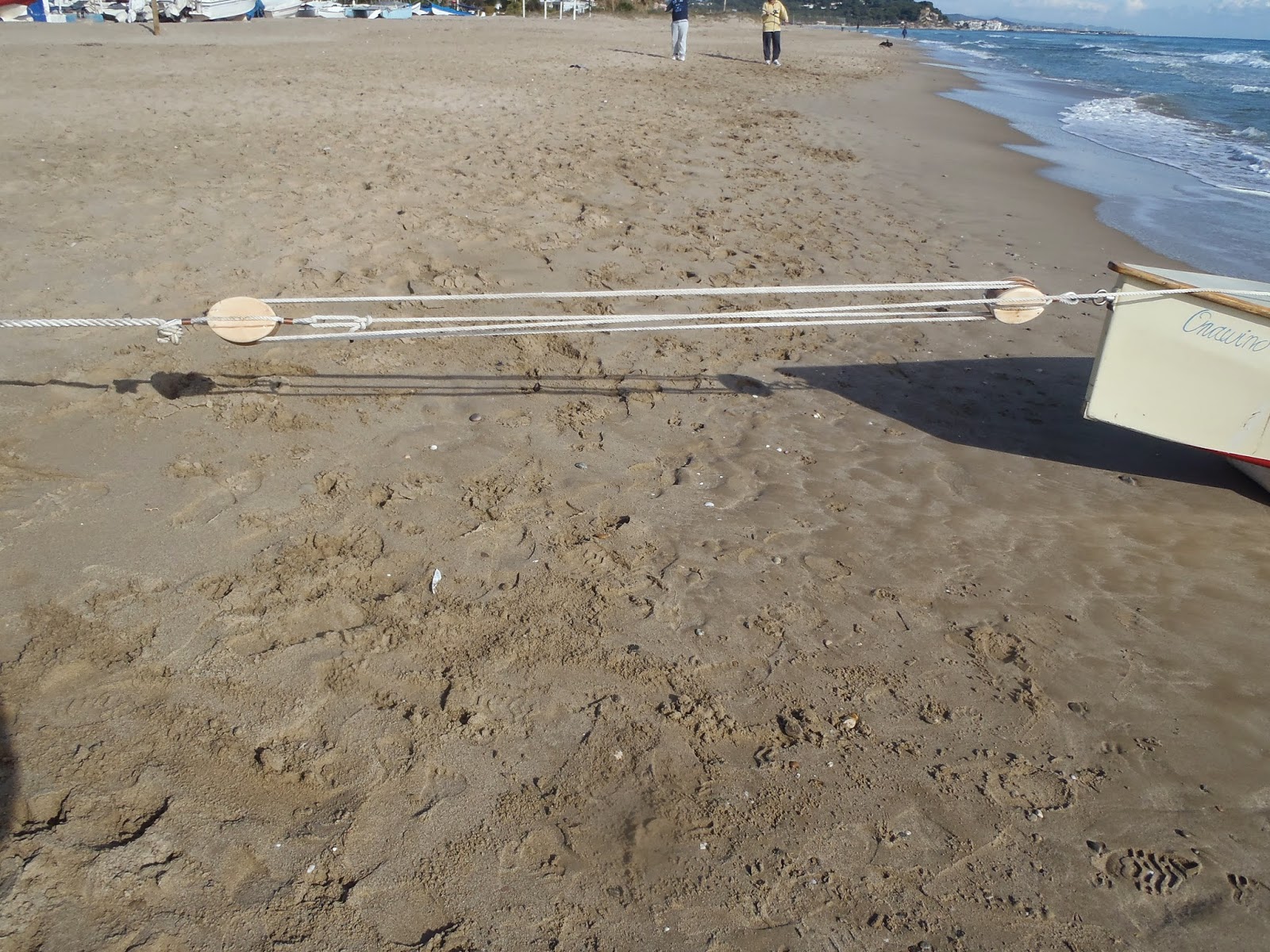 I was 15 metres from where the block lay waiting, I couldn't leave the boat to go and get it as she'd drift off and the tackle wouldn't reach that far anyway. What's more I lacked the strength to move the boat that critical one or two metres onto the safety dry sand, especially when a quarter full of water.

The situation was a familiar one and I'd learnt that I couldn't yield one inch to the sea that would drag the boat away from her destination with every wave that washed under her. However, with every wash of water that floated her I managed to gain a small amout of ground. In this way I took a very long time to travel the short distance to the waiting tackle, I hooked on with relief and started to haul on the line. I hauled and hauled some more. Nothing appeared to be happening, other than an ominous tension growing in the line. Then suddenly the boat lurched and turned to face up the beach. I tied off the line to a cleat in the boat and got a fender under her bow then unscrewed the drain plugs and pulled again. She came forward another metre and there, out of danger from the sea she could drain while I pondered. The line was far too elastic. For two metres of ground I should have hauled ten of line but there seemed to be rope everywhere. 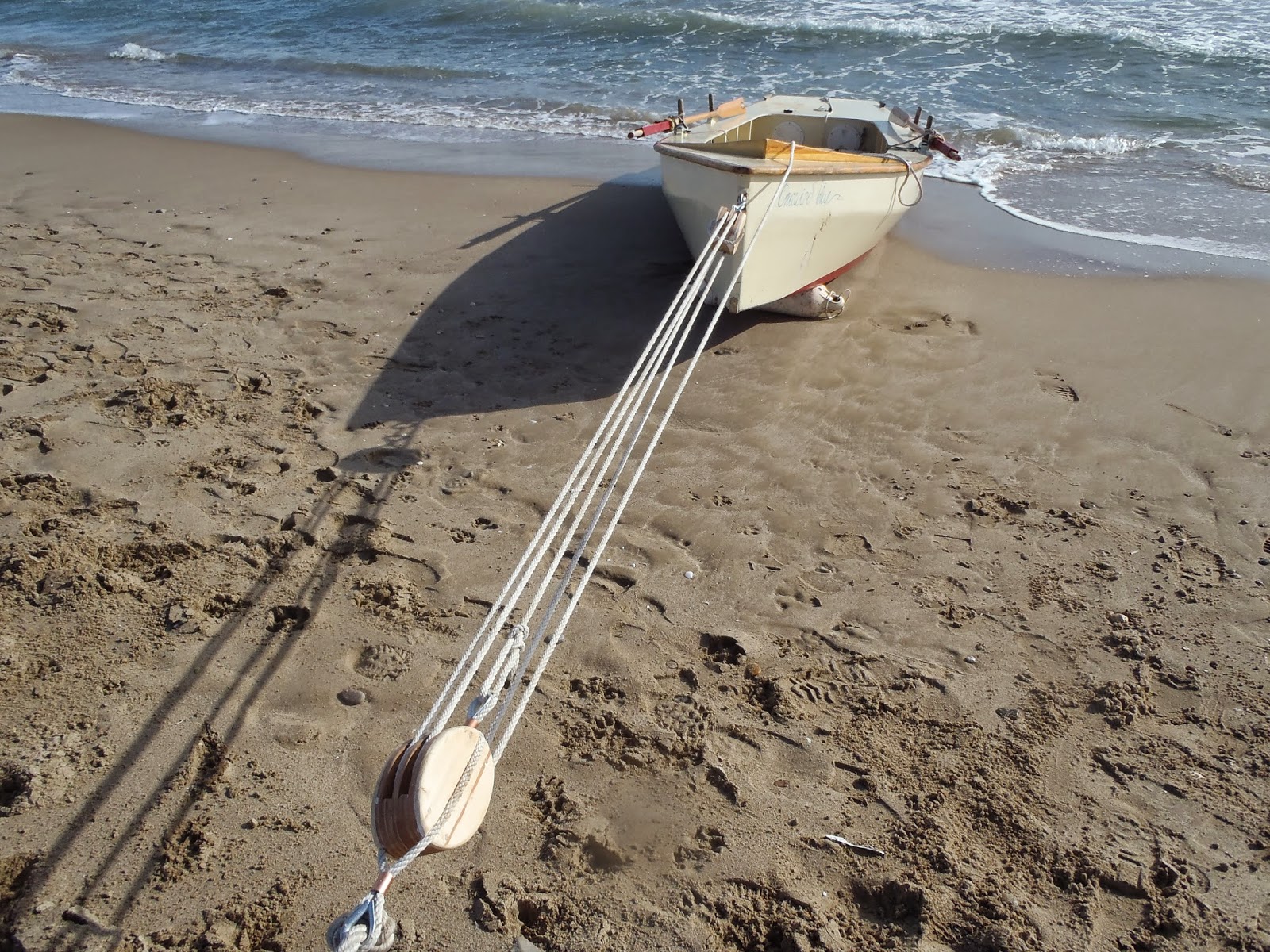 I didn't like the looks I was getting from the people stepping over the taughtly streched lines crossing the beach, but the tackle had done its job and I now had as long as I needed to heave and harumph the boat, on fenders, the 20 metres to her place in the dunes. Then I stowed her gear, replaced the cover and tidied the lines away.

I got home, ate a large plate of potatoes, took a hot tot of brandy, put on my best woollens and went to bed for the rest of the afternoon. 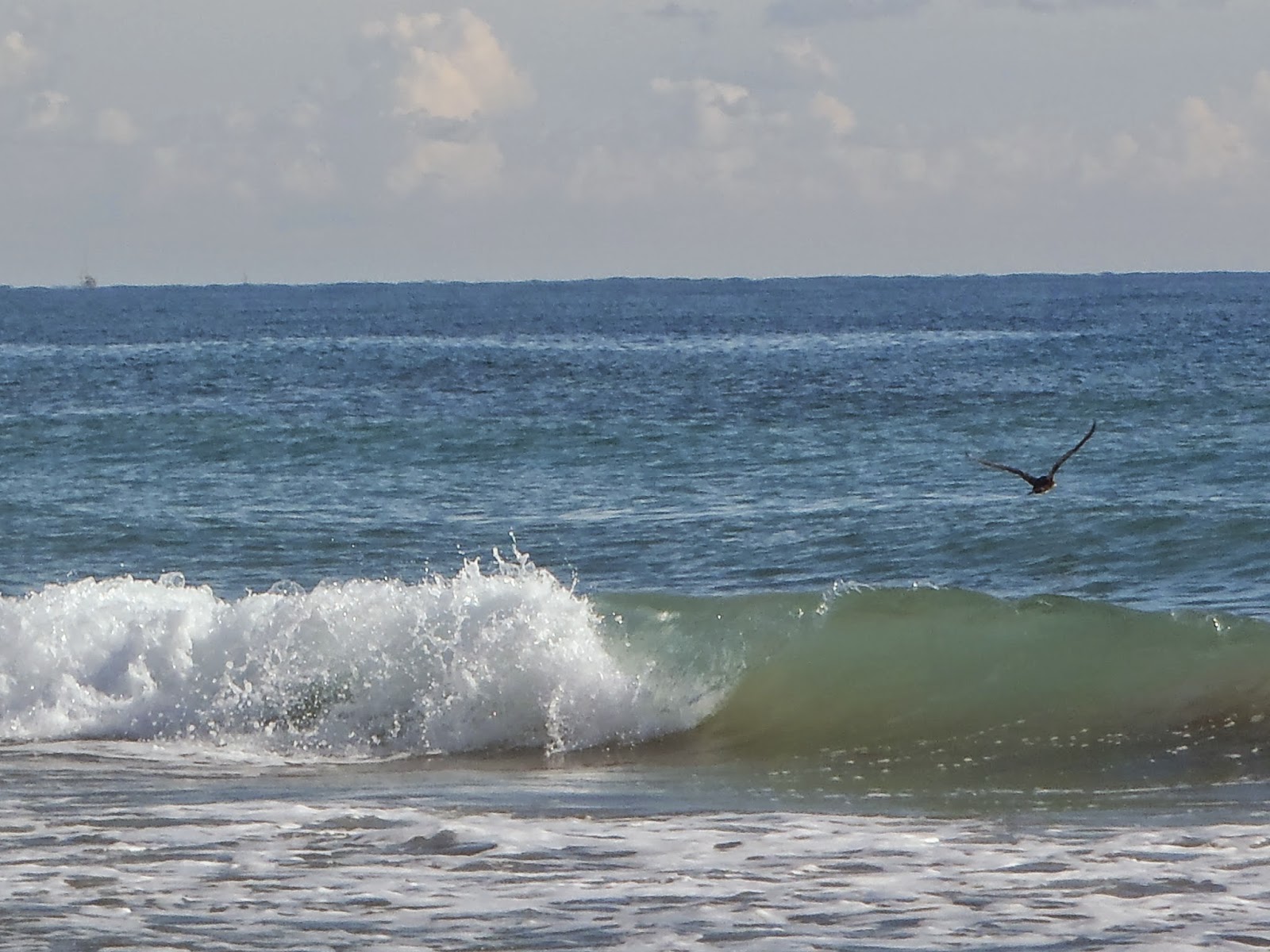