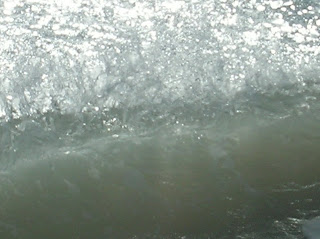 Before the decision to build the Light Trow became irreversibly cemented in my mind, I’d spent several months looking at other designs. I saw plenty of good boats, many with the advantages that come with bought plans and a history of successful builds.

Here are some of them.

Like many before me I started by looking at Phil Bolger’s designs. I don’t have the stamina to try to do justice to Bolger here, widely considered a genius and with over 700 published boat plans he’s just too large a subject.

To my mind his brilliance lies in his ability to confront each new design challenge with a total objectivity that allows him to shrug off cumbersome allegiances to design traditions and nautical aesthetics. This ‘out of the box’ thinking has produced some truly revolutionary and, it has to be said, boxy boats.

The Bolger Brick, as the name implies, is one such open box with an offset mast stepped on the front corner of the bow and a leeboard. It was the first Bolger boat that I came across and although it didn’t appeal to me I was fascinated by the attitude behind it. Here was a design that simply said, get out on the water and have fun regardless of the depth of your pocket, your nautical experience, or what other people think. I found this vision refreshing and far removed from the prevalent attitudes of the western Mediterranean. 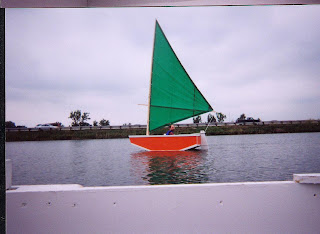 Much of Bolger’s work of the early 80’s explored the possibilities of the tack and tape or stitch and glue method that resulted in the book Instant Boats by Harold ‘Dynamite’ Payson. Payson had built all the boats featured in the book and had wrung out any flaws. In second book was published, Build the New Instant Boats, which featured, along with detailed instructions for her construction, the nifty, slick-looking 15ft Gypsy. With an off-centre centreboard, a neat inboard oar storage arrangement and a triangular spritsail that would propel her slim hull swiftly over sheltered waters she seemed ideal for a first boat. But she wasn’t screaming “I’m your boat!” and, being undecked didn’t suit my sailing area.

Windsprint is another design featured in the New Instant Boats. Similar to Gypsy in length but radical in having no frames, being double ended and having the centreboard so far off-centre as to make it more of an inboard leeboard. The secret to the boat’s rigidity, given the lack of frames, lies in the triple thickness gunnels, which provide all the required stiffness.

Windsprint’s unusual hull was the result of a Bolger experiment. The idea was for a sailing catamaran with an aft stepped sail and a rudder hung on the bows. The experimental craft didn’t fulfil the designer’s expectations but the single hull obviously worked and as Harold Payson had made one he persuaded Bolger to design a rig for her. Windsprint is a pretty boat and, with a large open cockpit, great for lounging on the waves, but with no deck and no built-in buoyancy again not especially suitable.

So while it seems that for the time being I’m not building a Bolger design, I still enjoy poring over his plans. One that particularly fires my imagination is the Light Schooner or Scooner. At 23ft long by 6ft wide and flying a massive, 266 sq ft of canvas on a low rig this boat whistles along off the wind at over 12 knots. To windward it’s neither so effective nor so fast but the trade off is almost certainly worth it for the white-knuckle adrenaline ride of downwind sailing. 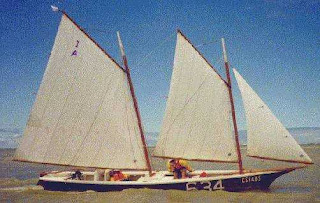 His and Her Schooners (Chapter 25, page 121 of 'Boats with an open Mind') is just 19'6" x 4'2" x 3'0". Bolger designed her as an individual option. I'm sending en email with my phone number. You have to read 'BWAOM' so I want to lend it to you (just the time to xeroxcopy it) never mind the copyright.