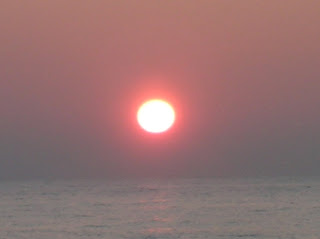 I like to think I’m careful when using epoxy. But what with the stress of a pot of mixed resin suddenly curing, the sweating caused by all the protective gear and the gas mask I unthinkingly scratched my head with a sticky, gloved hand. The result, I found out while cleaning up later, was a dice-sized lump of wood welded to my locks. I tugged at it but quickly realized that it was scissor job. I cut it out and found that it left such a dent in my hair that there seemed nothing for it but to get the lot chopped.

I chose a bright, light salon with white clad girls busily working on heads of hair. I asked for a short cut and pointed to the dent and a young girl led me straight to the hair-washing sinks. It was only when sitting with my head back, waiting for her to start that I noticed a sign declaring, ‘Hairdressing school, please bear in mind that we are learning.’ Then I saw that the heads being busily worked on by the other girls were dummies. I was the only live customer. I rose to bolt just as the girl opened the tap and filled my right ear with freezing water. Before I could recover she adjusted the temperature and filled the left ear with boiling water. Then, for good measure, she dropped a glob of shampoo on my forehead that slowly ran down to my eye. By the time she’d finished lacerating my scalp with her long nails my ears were so full of water that I could hear whale songs. In an aquatic world I was led to a chair. I sat down just as she trod on the height adjuster pedal. The chair shot to the floor.

I looked at my forehead in the mirror. Then she started to pump the pedal and the chair rose up. My face came into view, my shoulders and torso but the chair would go no higher for my knees were trapped under a shelf. ‘Stop!’ I must have shouted though to me the voice was no more than a faraway watery echo. ‘aytechodaño’ she chirped from a distance and pressed the pedal that sent me whizzing to the ground. She pumped me up again and started to comb my hair, then she combed it some more, and a bit more, and then she combed the front. Satisfied, she looked at me as if to ask, ‘Is that to your liking, sir?’

I could see that the fundamental concepts of hairdressing were bizarrely foreign to this school. I asked her to cut it shorter please, half its present length, or as short as that spiky tuft on my crown. She combed the sides. The comb banging on my ears interfered with the whale song. I wasn’t getting my ideas across. Maybe they only taught as far as combing. Or was it the language? ‘Más corto,’ (shorter) Well that was Spanish alright, but it didn’t make any difference. I tried again in Catalan, this time with a please, “Més curt, si us plau.” She gave me a look that said, “My scissors don’t do that sir.” And she was right. Tightly gripping a lock of my hair and the scissors between the fingers of her left hand and with the comb held in the other the transference of the tools of her trade to her right hand required more co-ordination than she could bring to bear and the scissors clattered to the floor. Thankfully she had to let go of my hair to retrieve them and when she stood up she went back to her comfort zone—combing.

The scissors did eventually make contact with my hair and the result was probably slightly worse than what I could have achieved myself.

More on epoxy another day.

Wonderfully written. I'd like to master English enough just to tell what happened to me when I went to the toilet... Cheers!

Great to see you over the last couple of days.
I wondered about your haircut, notably shorter than the last time I saw you (mind you, that was 18 months ago).
We left today (Friday) at about 11.30. We thought about staying longer but the rain seemed to be thickening, and it's quite a long way back. The new camper engine is settling in and I'm sure will cruise at 100+ kph soon enough, but for now I think 90 is the limit.
Anyway - on the subject of engines - I'm delighted with my Stihl Chainsaw - this morning I pruned about 8 trees in 90 minutes or so. I'm going to clean it and check the chain tension, etc etc.
I'm sure I read in the manual that you shouldn't leave it for long with fuel and chain oil in the tanks. Do you drain yours during periods of inactivity?
I'm very tempted to drive back up next weekend and do a few more days on the trees, but I'm semi-commited to a physical theatre workshop down here. We will see.
There's a chance I might make it up again in June - if so, hope to see you then.

Yeah, a very enjoyable few days. I don't usually drain my saw but quite often work until it runs out of petrol. If 2 stroke mix is left in the carb for long periods it will go off and make the saw hard to start. Let us know if you're coming back up.

Hiv disease for the last 3 years and had pain hard to eat and cough are nightmares,especially the first year At this stage, the immune system is severely weakened, and the risk of contracting opportunistic infections is much greater. However, not everyone with HIV will go on to develop AIDS. The earlier you receive treatment, the better your outcome will be.I started taking ARV to avoid early death but I had faith in God that i would be healed someday.As a Hiv patent we are advise to be taking antiretroviral treatments to reduce our chance of transmitting the virus to others , few weeks ago i came on search on the internet if i could get any information on Hiv treatment with herbal medicine, on my search i saw a testimony of someone who has been healed from Hiv her name was Achima Abelard and other Herpes Virus patent Tasha Moore also giving testimony about this same man,Called Dr Itua Herbal Center.I was moved by the testimony and i contacted him by his Email.drituaherbalcenter@gmail.com We chatted and he send me a bottle of herbal medicine I drank it as he instructed me to.After drinking it he ask me to go for a test that how i ended my suffering life of Hiv patent,I'm cured and free of Arv Pills.I'm forever grateful to him Drituaherbalcenter.Here his contact Number +2348149277967...He assure me he can cure the following disease..Hiv,Cancer,Herpes Virus,Lyme Disease,Epilepsy, ,Bladder Cancer,Colorectal Cancer,Breast Cancer,Kidney Cancer,Leukemia,Lung Cancer,Non Hodgkin Lymphoma,Skin Cancer,Lupus,Uterine Cancer,Prostate Cancer, fibromyalgia ,ALS,Hepatitis,Copd,Parkinson disease.Genetic disease,Fibrodysplasia disease,Fibrodysplasia Ossificans Progressiva,Fluoroquinolone Toxicity Syndrome,Liver/Kidney Inflammatory,infertility, bowel disease ,Huntington's disease ,Diabetes,Fibroid...

Most prostate cancers are adenocarcinomas, cancers that arise in glandular cells of the prostate’s epithelial tissue. Prostate cancers usually progress slowly and produce no symptoms in the initial stages. Eventually, the tumor may enlarge like mine use too, the prostate gland, pressing on the urethra and causing painful or frequent urination and blood in the urine. So I was so uncomfortable with this prostate cancer diseases then I decided to do online search on how to cure cancer because I well have read a lot about herbal medicine,I came across a lot of testimony how Dr Itua cure HIV/herpes then Cancer was listed below the comment.with courage I contacted Dr Itua and he sent me his herbal medicine through Courier service then I was asked to pick it up at my post office which i quickly did. I contacted Dr Itua that i have received my herbal medicine so he instructs me on how to drink it for three weeks and that is how Dr Itua Herbal Medicine cure my prostate Cancer, The treatment takes three weeks and I was cured completely. Dr Itua is a god sent and I thank him every day of my life. Contact him now On:Email:drituaherbalcenter@gmail.com/Whatsapp:+2348149277967.
He listed to that he can as well cure the following diseases below.... Cerebral Amides. Lung Cancer, Alzheimer's disease, Adrenocortical carcinoma. Alma, Uterine Cancer, Breast Cancer, Allergic diseases. Kidney cancer, Love Spell, Colo rectal cancer, Lottery Spell, Bladder Cancer, Skin Cancer, HIV /Aids, Herpes, Non-Hodgkin lymphoma, Inflammatory bowel disease, Copd, Diabetes, Hepatitis

Simply wish to say your article is as astonishing. The clarity in your post is simply great, and I could assume you are an expert on this subject. Same as your blog i found another one Sohman Epoxy .Actually I was looking for the same information on internet for
Table Top and came across your blog. I am impressed by the information that you have on this blog. Thanks a million and please keep up the gratifying work.