L'Ametlla. The morning after. 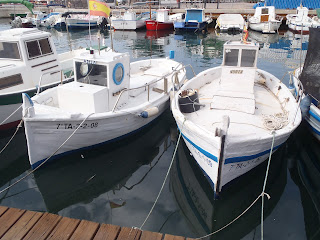 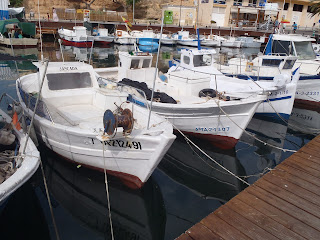 It's not easy to get a lie-in when sleeping in a car, the heat, the mosquitos, the bright sunlight, the noises off—in this case seagulls and outboards, not as noisy as a Seagull outboard motors themselves, but nonetheless a racket.


I was moored by the crane ready for an early haul out but as it still wanted three hours until 9 o'clock I went for a row. Which turned into a sail. And then into a long row when the wind failed.

The wind returned just as I reached the harbour entrance so I hoisted the sails again and wafted in. The good thing about boating festivals is that rules are waived—normally you can't sail or row in ports, you have to use engine power. Being in the shadow of the seawall the wind was fluky but I slowly made my way to the inner harbour where the lateen fleet were still sleepily rafted to the quay. I sailed up and down for a while enjoying the short boards, tacking upwind and gybing down, sailing up to the raft as if I were going to tie on, then bearing away. All good sailing practice. Other boats took to the water and we made for the harbour mouth but the wind was dropping again and so I turned down my avenue and so to the crane. 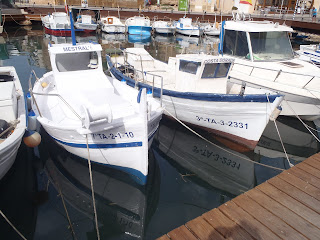 And that was the end of the sailing fest. The boat on the trailer I walked into town for some late breakfast, examining the small fishing boats as I went. There was a time when, while refitting these boats, the old caulking was ripped out to be replaced with silicone gunk and that seemed like a step in a dubious direction. Now, however, there appears to be a fashion for layering up wooden hulls with fibreglass mat until any woody angles they may have are buried under curvaceous coats of gloop and paint. Not until the boat looks like a floating blancmange are the pudding makers satisfied. As the fleets get smaller these craft often come up for sail but I wouldn't like to be the one who returns one of these heavy meringues to a traditional wood finish. 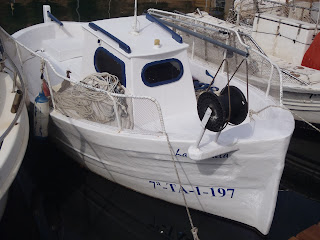 Also new to me were the relatively recent additions to the tuna fishery. Remarkable skiffs, with bluff bows, great skids and 450hp engines. Imposing as they are the skids deliver no hydro dynamic advantage but rather their purpose is to keep the boat flat, so that the occupant doesn't tumble out of the back, as the boat is winched up the mother boat's stern ramp. At sea the powerful skiff's job is to tow the net, one end affixed to the main craft, in a great arc, encircling the school of tuna and so bringing the net back to the boat. The skids perform a secondary function in keeping the net clear of the rudder. It is an industrial purse seine fishery and the catch is usually fattened at sea in cages before market. 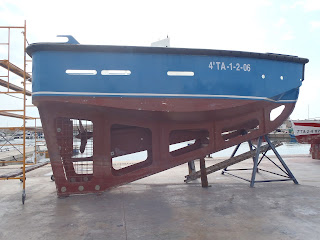 A fisheries inspector recently told me that tuna stocks were healthly again. If so great, but I must admit that the more I endeavour to understand about fishing the less I seem to know for certain. 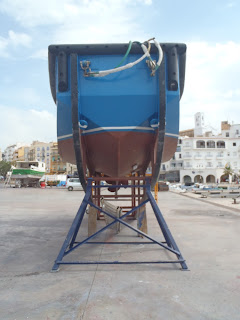 Never give up in life they all say no cure to HSV 2 which is a big lie I have pass through many process also i never believe there is really cure to HERPES until I meet Dr.zubby the doctor that have been helping many people for many years, I come across this doctor online when I was searching for cure online I found out about this man, and to my greatest surprise this man have the herbal medicine which I have been looking for years I explain my problem to him through the email I found on someone who testify about him also, Dr.ZUBBY write me a reply and explain how the process work so after ordering for the medicine I got it within 4 days and I took it according to the way Dr.ZUBBY instructed, I was so happy after two week I took the medicine there was very big change in my health when I was done with the process I go for test, I found out I am negative that was the day I have the tears of joy you can also get in contact with my doctor through his email now dr.zubby843@gmail.com or you can also WhatsApp him +2348070673249. And He also have herbs medicine to cured the following diseases; eczema,urethra wart,chronic problems.Herpes, Cancer, Als,Hepatitis, Diabetes, HPV,Infections,ulcer ETC for m ore information followe the pags below https://web.facebook.com/Drzubby-herbla-home-112207317016092

Are you suffering from herpes Contact a herbal doctor for cure he has herbal remedies and cure for your problems visit his email on {oliha.miraclemedicine@gmail.com} or
Whatsapp contact :+2349038382931 website i saw on the :https://olihamiraclemedicine.webs.com/  I was help by him when I had similar problem.
He also have a herbal cure for the Following DISEASES,this is Real
Herpes, Cancer, Als,Hepatitis, Diabetes, HPV,Infections ETC