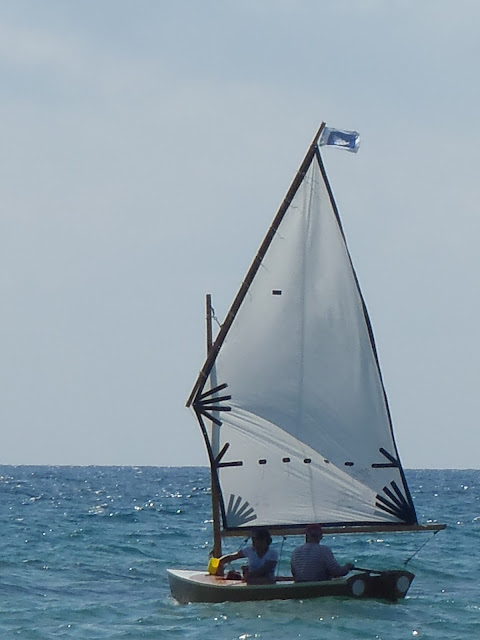 It's not always easy having relations to stay but Onawind Blue's cousin Ella was the perfect guest. Pretty, undemanding and grateful of the fresh water clean out and other attention she received at The Invisible Workshop.

The time for her to leave came about all too soon and unfortunately I hadn't had the chance to take her out on my own. (Though the doctors would say that solo sailing is still beyond me.) I hadn't expected Jordi and Anna, the intrepid pair that were to sail the next leg, mainly because the wind was foul. It would be a slog for them even though the leg was short. They were keen to get going and we wheeled Ella to the beach, me inwardly cursing that I hadn't organised some crew so that I could sail with them in OB. I desperately wanted some photos of the two boats together on the briny.

We set up Ella and launched her with out mishap and I watched from the beach as she beat out to sea, tacked and set off up the coast. 'There goes a missed opportunity.' I thought as I sloped home, stopping beside OB to tidy her interior. While deciding how best to spend the afternoon without feeling sullen, my friend Alex cycled by on his way home for lunch. 'Going sailing?' He asked. I looked at him, he's only 24 and built of solid muscle.

'Fancy coming?'
I saw a sparkle in his eye.
'Quick, go and put your bike away. I'll see you back here in 10 minutes.'

Ella had a good half an hour start on us and from the beach I could no longer see her. Having seen that she's fairly good upwind I wondered if OB could catch up. Alex and I boarded and took a long beat out to sea. Hoping that familiarity with my boat would give us an advantage close-hauled I arranged Alex's 80 kilos to provide the best trim, milked every gust and never fell off the wind except to gain speed when slowed by waves slapping on the windward bow. With a racer's grimace across my gob I tacked and set off on the new course in earnest pursuit.

Although Alex and I maintained a continual yakety yak my mind was on the sailing, and on my boat. Could it be that I'd forgotten how well she sails? It wasn't long before I could see Ella's sail, she was just closing with the marina at Roda de Bara. She tacked and I judged that OB was two thirds of a mile downwind. After a few more tacks we were alongside her. 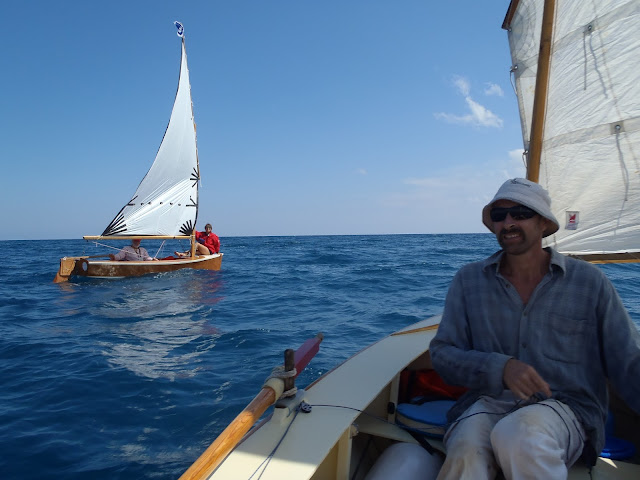 Sailing close-hauled it was clear that OB had more speed (as one would expect from a longer waterline and more sail area) and I spilled wind so that we could sail together and converse. Ella had a problem with the sail, it wasn't setting well, with wrinkles (girts, Michalak calls them) from the clew to the throat. I'd noticed this when sailing her myself though had hesitated to heave on more tension as the throat didn't seem to be sufficiently reinforced. I'd strengthen the throat in The Invisible Workshop but still those girts persisted. 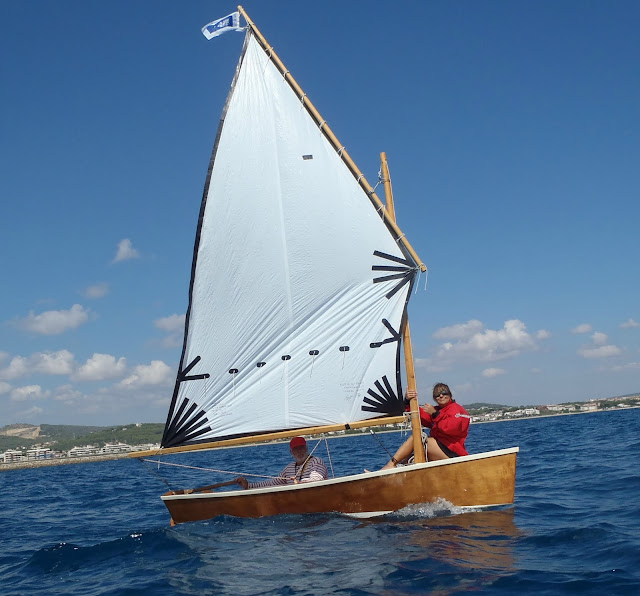 The force 3 breeze fell to a low F2 and we began to wallow. I thought about what to do. We couldn't complete the whole trip because I wouldn't have the energy and I was worried that the wind would entirely fail. Of course I could strap Alex to the oars, but I knew it was time to be going, OB and Ella had sailed together. So I turned OB towards home.

After a short distance I spied a kayak and hailed it. Alongside it transpired that the kayaker was one of my blog readers and so I felt confident in asking him a favour. I passed him my camera and turned once again to pursue Ella. Unfortunately I didn't get my new friend's name but am very grateful for the photos he took of OB and Ella sailing together. (Moltes gracies company!) 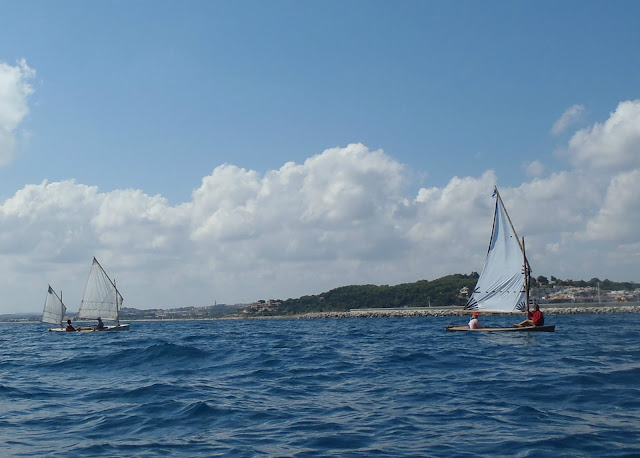 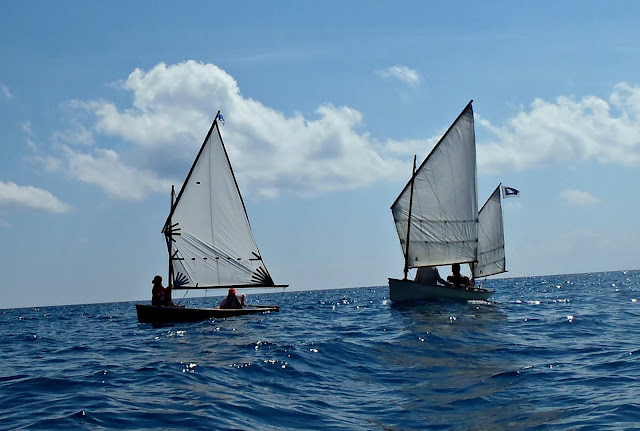 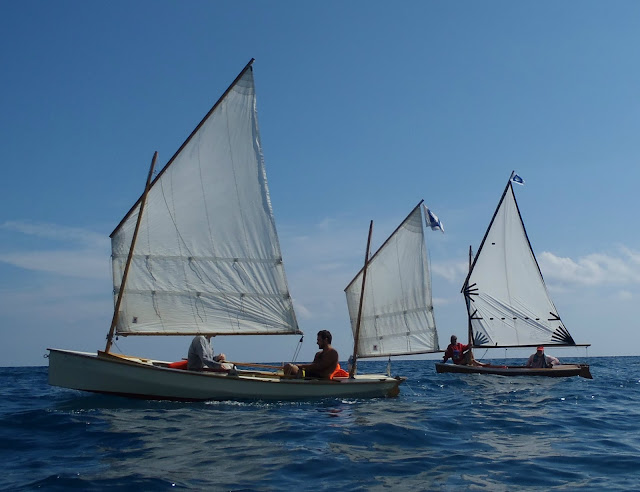 Sailing towards home the chit-chat lulled and Alex and I fell into that blissful trance-like state that comes when sailing broad in a light wind under a hot sun. My mind turned to food, just a few days ago I'd emptied OB of rusting tins and made a small feast of the mackerel fillets a la diablesse, smoked cod liver and partridge in vinegar marinade. OB still hadn't been restocked with emergency rations. Alex was peckish too. To relieve our sun-baked brains we stopped for a swim. Alex is a skilled diver and spearfisherman and he immediately headed for the bottom in search of an octopus. I swam quietly round OB, washing grime off her sides with handfuls of seawater.

Alex returned empty handed and we sailed home. Heaving OB up the beach and onto her trailer Alex said, 'Did you really do all this on your own before?' 'Yes,' I replied, 'but I never used to be this hungry.' We smiled at each other, weakened and wan sailors. Alex sped off to his mum's cooking and I went home and gazed into the fridge. 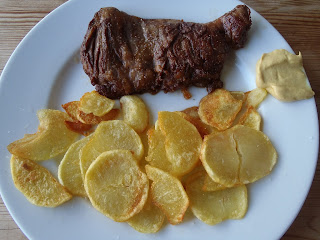 haven't visited the blog in a while; nice to see you're out sailing. A companion boat makes for a fun trip, eh? I also wanted to let you know I really enjoyed Catalan Castaway, and I hope there is more writing in the works.

On that note, you should think about writing for Small Craft Advisor Magazine in the U.S. What you're doing with Onawind Blue (and where you're doing it) would be of great interest to their readers.

Hi Tom,
Glad you enjoyed the book
B

Whichever the doctors have found to keep you away from solo-sailing, we send you lots of energy from the atlantic shore.

Great post Ben! Made me hungry for some steak and sailing!

Hey Ben, another nice post. Just dropping a line to wish you a happy new year, may it bring joy and health to you. I'm enjoying reading your book, as you said in the foreword, being a follower if your blog , the material is not new to me.... But it works really well in book form, a great achievement of yours.
Btw I always meant to write to you about my encounters with big white turds while sailing my 12ft dinghy in the coastal waters of Sardinia.... I'll do so at the soonest occasion... Take care

Hello Ben,
Hope you'll find some time to catch your fan's up on your latest sailing in "Onawind Blue".
Best for you and yours..

Ben,
Just was over looking at your friends web site 'La Grande Bouffe' ( 20 Oct 13 ) and he had a Rovellones Sauce that would go good with that Steak and potatoes you had made...

Try moving the halyard attachment point further aloft on the yard to reduce the wrinkles extending between the throat and clew.

Addendum to above: Ella's sail also appears to suffer from insufficient luff tension, which can be remedied by setting up the halyard or downhaul tension really tight. A taller mast might be wanted, unless there is no objection to a much lower boom.