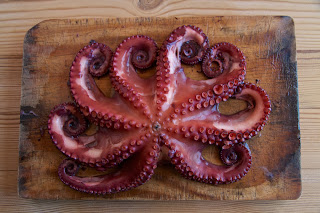 Octopuses have appeared a few times on this blog in a metaphorical role. But as well as playing the part of symbolic monster of the deep and representing fear on and off the water, they also feature in my kitchen.

These eight armed cephalopod molluscs are fascinating creatures and over the next few months I hope to upload several posts about them. Before going into details though, I wanted to show these photos. That the octopus is a beautiful creature in the sense that all living beings are possessed with beauty goes with out doubt, however the octopus also harbours the kind of aesthetic harmony that in another context would merit a design award. 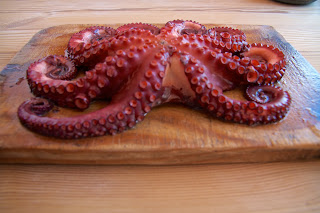 I caught this octopus over the summer (I never buy them) and, after six months in the freezer, cooked it up the other day. Preparing an octopus for the table is a three part process (again more on this at a later date) and these photos show stage two, the creature having been boiled in water for 90 minutes. 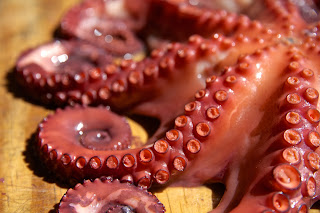 How relieved I was to find you are talking of a real octopus! Yes, it is very beautiful. I have very little experience of eating them, and look forward to your cooking instructions. How do you catch them?

I catch them by hand. I'll explain in detail some day.