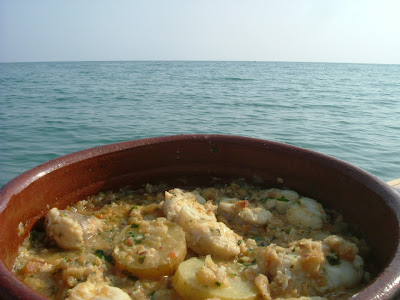 According to the great Catalan writer Josep Pla (1897-1981) fish stew as cooked and eaten by fishermen is the most ancient of Mediterranean dishes. Regardless of the religion, the rulers or the nationality of the neighbouring shores fish stew has been a constant.

A simple dish with a long history that, marrying fish, onion, garlic, tomato and potato in the pot, produces sustaining, sumptuous yet delicate fare. (Though tomatoes and potatoes wouldn’t have featured until they arrived form South America in the 16th century) From this fundamental marriage the Provencal bouillabaisse was born and also the less elaborate suquet of Catalonia, a dish that has attained an almost legendary status (at least on its home shores) and one that usually carries a price tag to match. But, however much you pay, restaurant food can sometimes be over complicated, smothering authenticity under sophistication.

Cooking the dish aboard a small sailing boat at anchor in sheltered waters, using fresh ingredients and the traditional Catalan earthenware pot, la cassola, elevates the enjoyment to the power of ten even if the cook is mediocre.

Suquet a la Onawind Blue goes something like this: sauté monkfish in olive oil until beginning to brown, 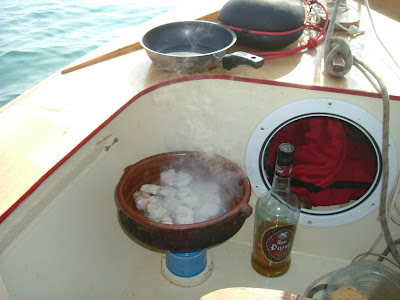 generously sprinkle with finely chopped garlic and parsley, add a glug of rum and ignite, remove fish from pot and set aside. 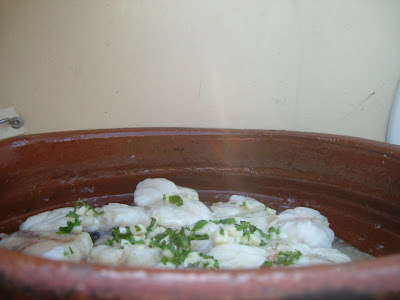 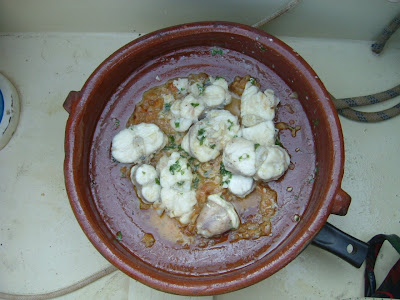 Return the fish to the pot together with a couple of thickly sliced potatoes. Add one part saltwater to three parts spring. 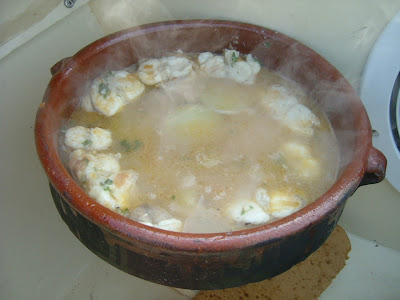 Cover, bring to a fast boil then simmer until the potatoes are tender. Finely chop garlic, parsley, almonds and fried bread and stir this mix into the pot. 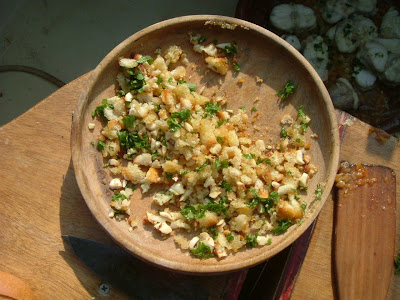 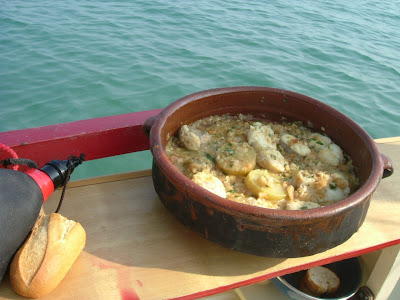 I can almost smell it Mr Chef! It makes a very pretty lunch.

Did you catch the fish? I guess there's always a danger of catching one that's bigger than you need.

No, I didn't catch it. The couple of times that I've been out intending to catch and eat I've gone hungry. And yes, the last fish I did catch was too big. I had tidied the boat prior to returning to the beach and was just hauling in the fishing line when I hooked a common dolphin-fish also called mahi-mahi. It was too big for me and I wanted to return it to the water but the damn thing put up such a struggle in the boat that I couldn't unhook it before it died. One of those stories that didn't quite make a blog post. I shared it out amongst my neighbours.

Ben,
Long time reader, 1st comment. Love your writing( or else I wouldn't be a long time reader would I? ). Does the bread really add to the stew, or just get rid of stale bread?

Truthfully, I'm jealous of you, Keep cruizin' ( I just want to do it on a bigger boat).

The fried bread thickens the liquid slightly and the raw garlic, parsley and almonds add characteristic, deep, nutty Catalan flavour. Though the dish is already very tasty without the ‘picada’ I would strongly recommend trying it. You can use stale bread but fried fresh bread will always taste better.

I just made this following your description. Except I totally forgot to add the rum!! And I don't have an earthenware pot. But it was very good anyway! I'll certainly make it again.