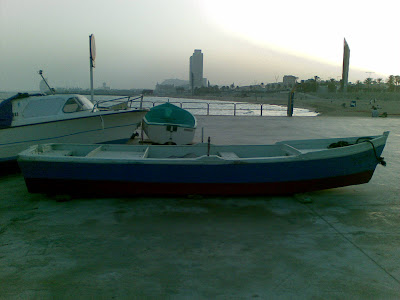 An unusual thole pin spotted in the cosmopolitan capital of Barcelona. In the up-to-the-minute, fashion conscious city the dictates of la mode don’t stretch to rickety old row boats. Refreshingly you can still use an old chair leg if you wish. 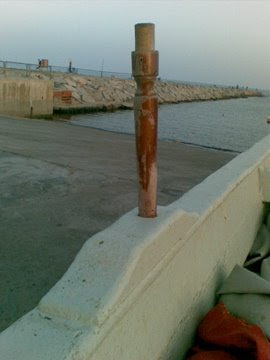 Even the most fashion-conscious Catalan doesn't like paying chandlery prices, clearly. I've borrowed your pic for rowingforpleasure.blogspot.com - I hope you don't mind.
Best of luck with your mast. I left mine square but it is a sprit rig so I could get away with it.
All best,
Chris

Not at all Chris, a pleasure.

Ben, I'm sure you are proud of OB, but if you had to build her again, would you consider building Core Sound 15 from B&B ?
http://www.bandbyachtdesigns.com/cs15.htm

Come round here and say that Al!

I'm sure Ben is proud of his boat, but guess how the designer feels ;-)

Actually, the Core Sound 15 is a very different boat - beamier and capable of carrying a bigger payload and crew, and with a bigger rig.

The Light Trow, by comparison is a lean kind of boat with a rather small displacement for its length and a narrow beam of 4ft - I think that's nearly a foot and a half narrower than the CS15.

All boats are compromises and I remember thinking that in making the Light Trow narrow enough to row, I was spoiling its sailing ability. In practice, however, Ben has got some good speeds out of OB.

As always in cruising, it's sail when you can, and row or paddle, or even motor when you must.

If one is choosing between the CS15 and the Light Trow, I'd say the issue is not which is the better boat, but which of the two very different boats most closely meets your purpose.

Thinking about alternatives to the Light Trow, I'd point to Ross Lillistone's Phoenix III or and some of John Welsford's boats. Haven't thought of too many others yet though, but maybe I'm just tired!

The Core Sound 15 looks like a good boat, I particularly like the cat ketch rig and the underwater shape promises good sailing.

My priorities were very clear when I built the Light Trow. Probably top of the list was hull weight; there was no point my building a boat that I couldn’t launch and retrieve solo on an open beach, often in waves with the possibility of capsize and swamping. The LT is just manageable on the shore though loaded for cruising can be quite a handful. Sailing in my area has shown that having the option of getting onto the land is a useful safety feature.

Another important consideration was rowing, not just manoeuvring in tight anchorages but seriously covering distances with no wind. I was prepared to sacrifice some sailing ability to achieve this. I was not interested in an engine and I think there will be less compromise in a boat that only has to perform under oars and sail rather than one that also needs to respond under engine power. OB rows very well, on flat water with no wind a fit person can cover 15 miles in five hours using as much energy as one would when walking briskly.

She sails well too. She’s not a performance dinghy obviously. I wanted a boat for cruising, a craft that could be sailed all day in a variety of conditions with comfort. Again OB achieves this. The rig is easily handled and versatile.

The cockpit is big enough to sleep in and the lockers are large enough for positive buoyancy and storage.

For the moment I’m still learning about OB and feel that I have a lot of miles still to sail in her. My priorities haven’t changed since I built her and for the moment she is exactly the boat I need. And yes, I’m proud.

So while I might consider building the Core Sound 15 and enjoy musing about it, unless my circumstance change significantly I’d still need something lighter and more rowable.

That is to say I agree with Gav when he says 'The issue is not which is the better boat, but which of the two very different boats most closely meets your purpose.'

Although the LT had never been built I felt her lines promised the simplicity I desired and I haven't been disappointed.

Thank you for your answers.

Gavin, I didn't meant to say which one is better,
is there anything "better" for everything ?

Obviously, for Ben's purpose (cruising),
which one is more suitable ? Your answers are clear.

OB hull is a nice hull, but aesthetically speaking I consider her rig a little bit ugly, (maybe I'm just not used to it), useful though.
I wonder if a cat ketch rig (if possible) would enhance the picture.


Ben, I am also concern about rowing capabilities,
specially after spending 5 hours on my 420 from Vilassar to Badalona. Masnou is the pot-au-noir of this part of the coast. Masnou shows permanent lack of wind.

I also launch and retrieve from an open beach, but when you cruise OB you don't take her out of the water (too heavy with all cruising gear). Thus, what is the boat is heavier, as CS15 ?

My compromise is less rowing capabilites but a planning hull.
That's why I were asking about Core Sound 15.


By the way, how come designers don't rate their designs with 10 points, for instance:

AL,
Several years ago I was quite tempted by the 420 but eventually realised that it would be unsuitable for cruising on this coast. It was only when I found there were no suitable production boats on the market that I decided to build.

Gav drew the LT with sprit lugs sails but I went with standing lugsails reckoning them easier to reef. The simple rig has proven highly satisfactory given that I value comfort and safety over speed. Easy safe reefing is essential on a cruising boat and I shall be improving my system when I get round to making the new spars. Personally I find the rig attractive, I love the way that the yards align to form interesting parallels.

A ketch rig would mean bringing the mizzenmast, its step and partners forward which would present several structural problems and might upset the easy equilibrium of a well balanced boat. But I don’t know enough about design to be able to answer this question thoroughly.

I think the point of the sprit rig on Ross Lillistone's Phoenix III is that it enables him to fly a jib from an unstayed mast. The sprit yard gives the tension necessary to counteract the forces of the jib, but again I’m no designer.

There aren’t enough natural harbours on this coast and I’m developing an aversion to the ‘puertos deportivos’ so it’s important for me to keep the option of beaching open. Even full of gear I can get OB out of the water rolling her on fenders. The main problems, as you certainly know, are waves and the steepness of the beach. I really think that sailed single-handed the CS15 would be too heavy for this. Though with a crew of two there would be no problem.

I rowed against a light head wind and a northerly swell from Barcelona to Mataro. I covered 17 nautical miles in 8 hours. I was hungover and it was hell. Light or windless conditions are very common from Cap Salou to La punta de la Tordera and if you haven’t got an engine you are reliant on the boat’s rowability.

Keep in touch Al (Alvaro?) I’d be interested to know what you finally decide.

Ben's quite right about the reasons for Phoenix III's spritsail sloop rig, and right too about the lugsails he's had made for Onawind Blue.

What's more, I think Ben's sails look smashing. To me they seem so natural, you'd think that boats of this kind had been built with that kind of rig for many years. I've pretty well come round to Ben's point of view on this issue.

In a boat of this size and beam, I don't think a cat ketch is the right rig, simply because of the small space available - wherever one put the aft-most mast, it would get badly in the way, and there would be less room to lie when camping.

If I were to change anything on this boat, it would not be the rig. It would be to create a flat surface forward with stowage beneath - something I'm glad to say I suggested in the rubric I wrote for the design when I first published it.