A day with the Ella Skiff 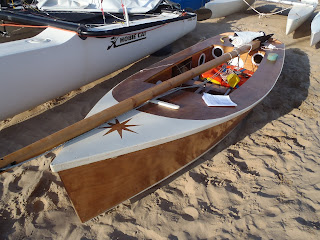 There's a great project underway here on the Catalan coast. It all started when a group of boating enthusiasts decided to build a boat together. They chose Gavin Atkin's Ella skiff for the obvious reasons of simple construction, free plans and good pedigree. The build took a year and the boat was launched on the Costa Brava at the beginning of the summer. After sea trails with a polytarp standing lugsail the boat was towed down to the south of Catalonia and the next stage of the project began. Whosoever, with boat-handling skills, was invited to sail the boat, in short legs, back up to the Costa Brava.

When Ella arrived just north of Tarragona I signed up to sail a leg, hoping to get the boat as far north as my home beach at Creixell. Being 10 kilos underweight and receiving potent treatment for a dastardly lymphoma I needed some crew and was flattered when my 16 year-old daughter, Yoeh volunteered. She doesn't have much sailing experience but I could rely on her ability to follow instructions, her common sense and excellent company. Now I needed both health and weather windows to overlap. Happily I didn't have to wait long.

The forecast showed 6 knots from a favourable quarter between 1400 and 1800 and I had woken with good levels of vim and vitality. But my main concern was that the wind would fail once we were at sea. The skiff is equipped with no auxiliary power beyond a pair of kiddy's paddles, which to me aren't really a viable means of traveling more than a few hundred metres, if that.

With the idea of hugging the coast like babes to a mother's breast Yoeh and I set up the boat on the beach. The skiff is equipped with the basics and well organised. One significant modification has been made to the design. With the idea that the boat might be left unattended on faraway beaches for untold days, openings have been made in the transom and interior bulkheads to allow the spars to be stored inside the boat. This would appear sound practice for the projected use of the Ella Skiff, though I'm always slightly wary of considerations that make life on land easier as they generally have some consequence at sea. In this case I worry that eventually the threads of the plastic lids that cover the holes will wear, leak and compromise the built-in buoyancy. Provision has been made for this however, and the manual that comes with the boat exhorts all users to line the threads with tubing before removing the spars and to exercise extreme care. 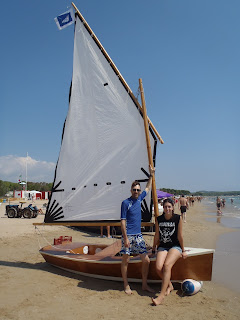 Ella is quite heavily built, revealing the builders' origins in lateen sail. In Catalan trad-boaty-speak mast is 'arbre'—literally 'tree', and the solid, sturdy pole up which I hoisted the sail could easily carry twice as much canvas. We rolled the boat to the water's edge on the fender that I'd brought for the purpose (and to serve as a seat once afloat) and waded out until we found enough depth to ship the rudder and daggerboard. We boarded, sheeted in, put the tiller to windward and away Ella flew.

The boat had caused some interest on the beach and I turned to wave to a small send-off party then re-trimed the sail to go broad and tootle along just 200 metres off the shore. 'Wow, she's fast.' said Yoeh, and yes, Ella was already well into her stride as we were still sorting out our seating arrangements. I sat on my fender inside the cockpit, wedging my torso into the after starboard corner with the tiller under my armpit and Yoeh sat on the windward side of the central thwart looking forward. Ella and her crew were comfortable all we could wish was that the wind hold. 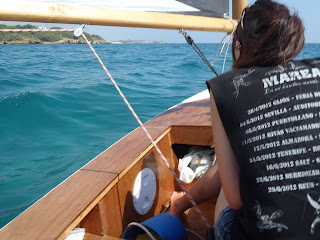 The GPS registered a healthy 3 knots and after sailing a mile or so Yoeh cut up a baguette for sandwiches, complaining that I could have bought ready-sliced cheese. 'Pre-sliced, industrial packed cheese is not for those who go to sea in small home-built boats,' I retorted snobbishly, 'Now use the boat knife to cut that nice, sweaty wedge of Emmental.'

As the sandwiches went down the wind came up and white caps began to appear. The breeze settled at a solid 10 knots, causing us no great problem but raising our speed a knot. At this rate home was going to turn up far too early in the day and so we changed course to practice other points of sail. 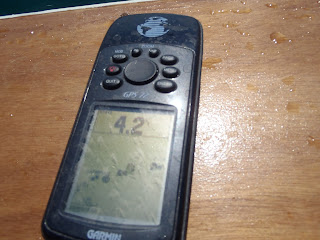 The boat had already shown herself to be well balanced, with a light tiller and a touch of weather helm but I was impressed at how high she pointed to windward. She was wet though, with the moderate breeze and chop and would have liked a reef. I tacked carefully and she came round well. I repeated the maneouvre with less finesse and got caught in stays, I backed the sail, put the tiller to leeward and reversed on to course. Sailing dead down wind with the daggerboard raised Ella became unstable and ached to gybe but by lowering the board a tad and turning slightly to windward she regained posture.

Ella was not designed for these open sea conditions but like Onawind Blue she behaved well with the decent breeze and short sea and frankly I wouldn't have expected less.

I'd added a 2 kilo anchor to Ella's kit—I just don't feel happy going to sea without one—and thought about stopping for a swim but the bays under our lee looked too crowded and lumpy and so we pushed on past OB's old haunts, Waikiki beach, La Mora, Tamarit Castle. We let everything fly briefly as we peered down at jelly fish and then I passed the helm to Yoeh and settled myself up forward facing aft. Yoeh turned Ella off the breeze, trimming the main and we were galloping again. The wind had risen but on this point of sail Ella was still comfortable. I worried slightly for the straining polytarp but knew that the spars could handle a gale.

'There's a big lump of plastic up ahead.' Said Yoeh. After little more than an hour aboard she was sounding like a wooden boat owner. 'It's coming straight towards us.' 'Don't worry, hold your course.' I said, 'we have right of way.' But she was uncomfortable and started to head up. 'Hold your course!' I repeated.

'But it's going to hit us.' She said with a rising tone. I thought it might be time to look round and check out the situation. For a minute It did indeed appear we were on a collision course but then a gap widened. The boat made no hint of modifying its course and throbbed by to port with its fenders out, girls sunbathing on the foredeck and suntanned swankpots yakking on the fly bridge. I've always exercised extreme tolerance with this breed of water-user but now, for the sake of my daughter's education I let fly in full colour. Satisfied with my imaginative combinations of expletives I sat back to enjoy the wind in my mustache but was nearly knocked off my perch by the arrival of motorboat wake. 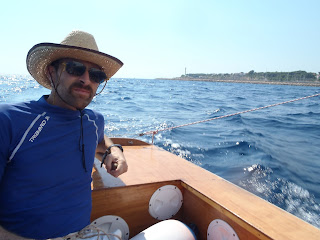 The wind remained firm and windsurfers skittered out from the beach at Torredembarra. Back at the helm I still felt no need to reef. The waves had grown and Ella hinted that she'd like to try surfing. I was happy to indulge her, bearing up ever so slightly at the base of the wave for maximum speed then turning stern to the swell, urging the crew to get her weight forward. As the skiff caught the wave we lent back and Ella zipped along with spray singing from her shoulders. (The GPS marked a max speed for the trip of 9.1 knots ) We whooped with joy and caught a few more waves before Creixell beach turned up. It was impossible to de-power the sail on this point of sail and we howled towards the shore, raising the daggerboard and rudder at the last minute and skidding a metre up the beach like jerks on a jet ski.
Posted by Ben at 22:48

Thank you for your blog Ben, I can't tell you what an encouragement it is to this lymphoma jockey to read about your exploits. I'm a little envious of your warm waters - I've got the Scottish Moray Firth to 'numb' the treatment! Planning to get out with our dolphins at the weekend!! Take care.

All the best Boatwithnoname. The warm waters are great but the crowds of ignorant stinkpot users are not, and I haven't seen a dolphin since the Ibiza trip. Hang in there, the sea cures.
Ben